2017 was a very important year for us, as after two years of struggles, Travelen was officially launched. The year had many trips, adventures, suspense, great moments, lots of food and beautiful images. Through this article, we are going to have a quick throwback to reveal to you a few things that you did not know, and to share with you how our Travelen-year was!!

But let’s take it from the start.. 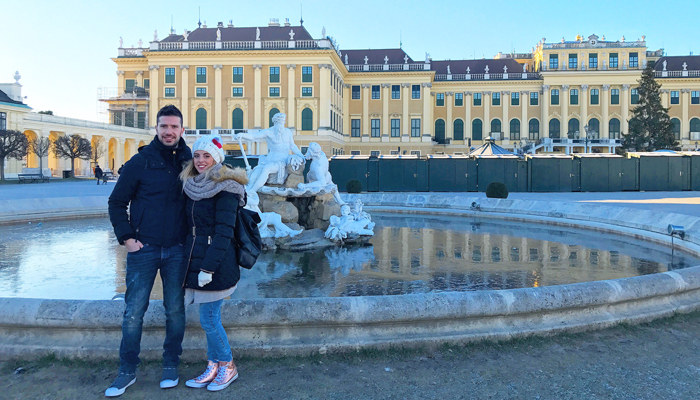 The start of the year found us traveling! So original! The last days of 2016 and some of the first of 2017 found us in the capital of Austria, princely Vienna!

??‍♀️ Elena: Gluhwein was constantly flowing, not for any other reason than to keep us warm!

?? Nikos: Did you also gobble down all those schnitzels to stay warm? You were eating like there was no tomorrow and you expected to be like Princess Sissi! Not everyone is born to be royalty!! We are only a handful of people that manage to meet all the qualifications..!

??‍♀️ Elena: Hey, Prince, get off your spanish horse and let’s go…Bratislava awaits us! 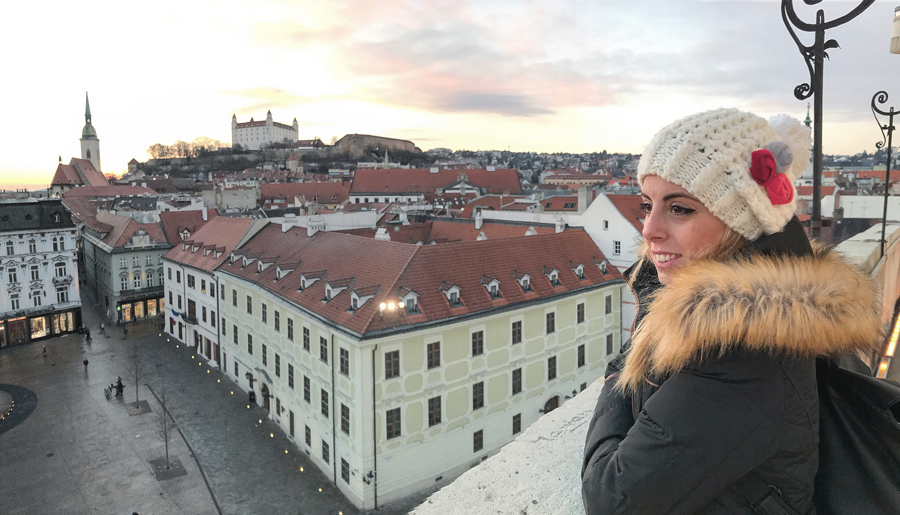 Our next stop was the capital of Slovakia. From the cosmopolitan and luxurious Vienna to the simplicity of Bratislava. A city that we loved from the very first minute! Quiet, quaint, plain, with cobbled medieval alleys and smiling people. It was there that we tasted the most delicious caramel cheesecake, the unparalleled haluski and the best chocolate that we have ever had.

??‍♀️ Elena: Oh Mon Dieu! How could I ever forget it? I still have its taste in my mouth.

?? Nikos: : I suppose that you did not buy any chocolates from the store now, did you? 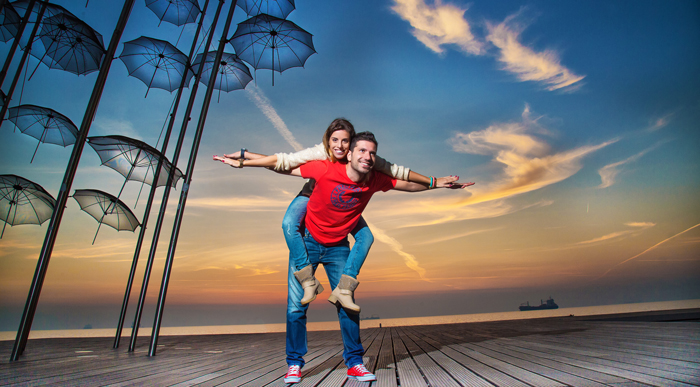 And it was finally time for it to take off…Travelen! The longest journey, which had started in 2015, was bound to end on April 28th 2017! Travelen started being built in 2015, but had the bad luck to fall upon untrustworthy companies, people that did not keep their word, who had no connection to the subject matter, as well as ambitious young people that did not have what it takes! But after a lot of patience, persistence and love, the strongest team was created and Travelen embarked on its journey… Just like we had imagined it that summer afternoon on the balcony of our home.

A jellyfish in June – Chania ? 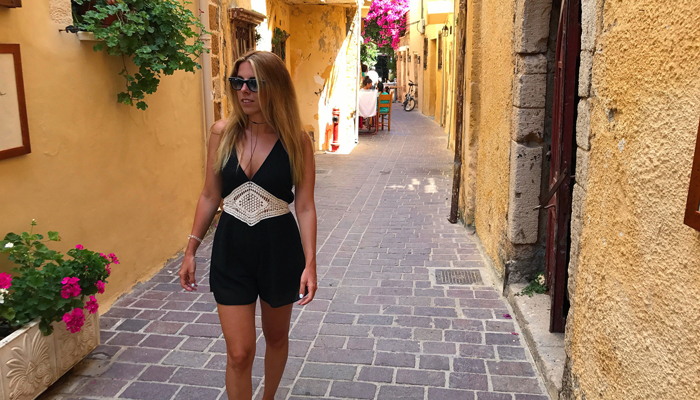 Having the next trip on our minds, time went by very quickly! June came and along with it was the trip to Chania! Our excitement for this trip was great, as it was Travelen’s first official trip. The same (if not greater) excitement was what the jellyfish must have felt, when it saw Nikos swimming leisurely in the waters of the Cursed Harbors (Seitan Limania)..

?? Nikos: “Wounds can heal only in one way” (I said yearningly!)

?? Nikos: Raki, of course! Is there any better way? Everything here is solved with some Raki! You have a problem…you drink raki! You are looking for a lady…you drink raki! Raki is everywhere..

??‍♀️ Elena: Are there going to be any appetizers? Otherwise, it might do me no good.. 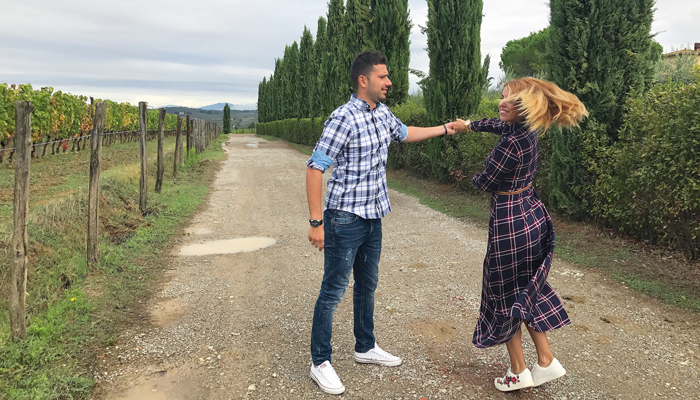 We did not even have the time to sober up after all the Raki and Tuscany’s wines followed. It felt like we were not that far away from officially being considered alcoholics! In Tuscany, of course, the sweet wines were not the only ones that got us dazed; the beautiful images of the countryside also did the trick. Those towers; those cypresses and lush green landscapes! We could wander around the Tuscan countryside for days, with our small Fiat 500. Next was the beautiful city of Florence, which enchanted us with its Renaissance architecture, the juicy Bistecca ala Fiorentina and the mysteries hiding behind every door!

??‍♀️ Elena: Are you talking about that door in the Ufizzi Gallery which that weirdo tried to open and resulted in us being chased?

?? Nikos: Yeah, that was something else! We were running without having done anything wrong! Although, to tell you the truth, I, too, wanted to open it and sneak into the Corridor Vasari like a second Tom Hanks.

??‍♀️ Elena: Keep dreaming…You would take 5 steps and you would get caught!

?? Nikos: Do not forget that I have served in the Navy. 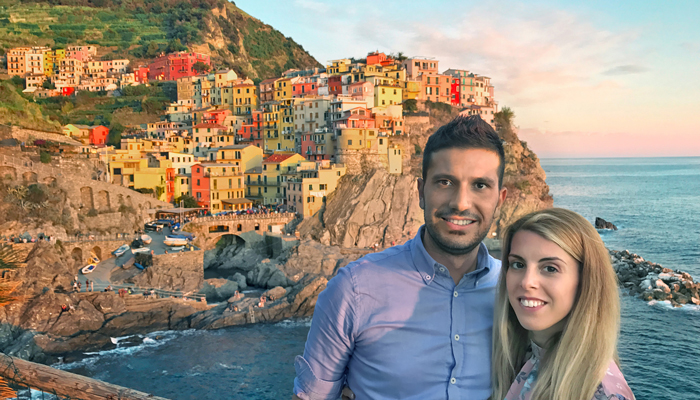 Of course, we did not miss the chance to explore some nearby destinations, which really thrilled us! Among them are the wine-held Chianti, the leaning Pisa, the colorful Cinque Terre and the fat Bologna!

10 Travel mistakes & how to avoid them

The spit of the camel – Dubai ? 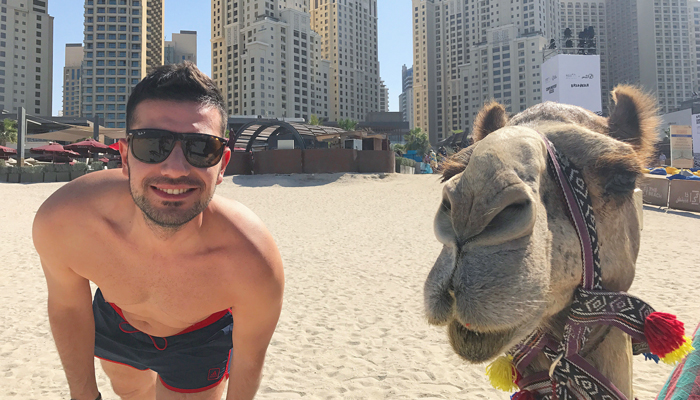 The year was coming to its end, but Travelen had not yet said its final word! What would that be? But of course…Travel! Dubai was our last stop for 2017. A stop that was warm, luxurious and different from the usual! In Dubai we took many lessons about our lives, as we came close to many people, listened to and shared opinions and loved the reason we travel even more. Although, there were acquaintances with whom we became so close that they had to spit in our face to get rid of us! Who performed this outrageous act? A camel from the desert, you don’t know her…We were only trying to take a selfie, but I guess we bugged the poor animal so much that it had to sputter all over us!

So, this was 2017 for us…with its ups and downs! With its wonderful and even more wonderful moments! Before we go, we want to wholeheartedly say a big Thank you for the love that you show us. We wish you health, love and all that each one of you wants.