What does one want in order to be happy? Good company, good food and a frozen beer. So we decided to go down to Aristotelous Square, where while having a view of our beloved seafront we stopped by the best souvlaki-restaurant in the city. Its name? 22 Souvlakia! 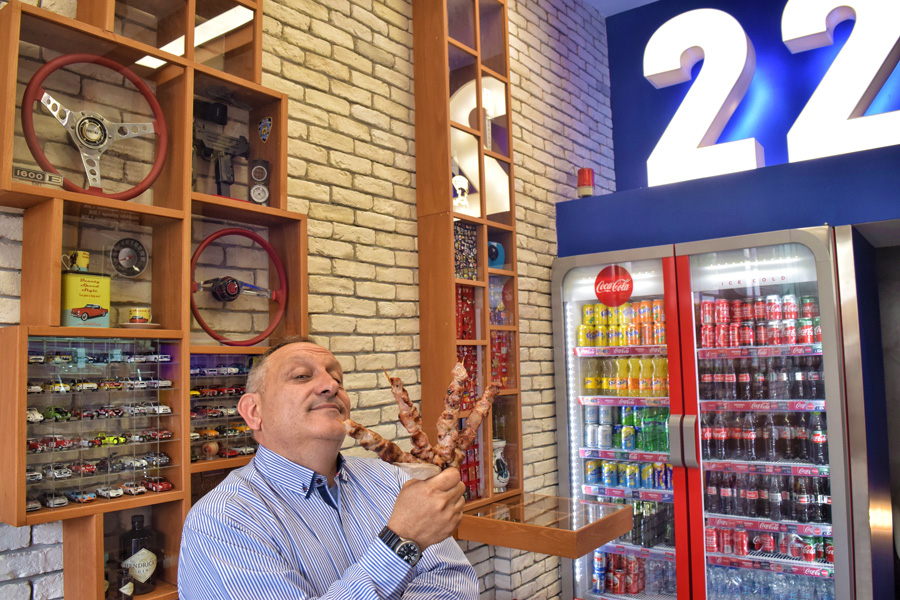 We all pretty much know Dimitris Ikosidios, either through the television, or by the amazing souvlakia he has been feeding us for years! At his new restaurant we found tastes that even our own palates could not believe. Dimitris’ Souvlakia were always special, and still he managed to bring them to an even higher level. In other words, he managed to serve the pork souvlaki even more tender, juicy and delicious than the chicken souvlaki!! 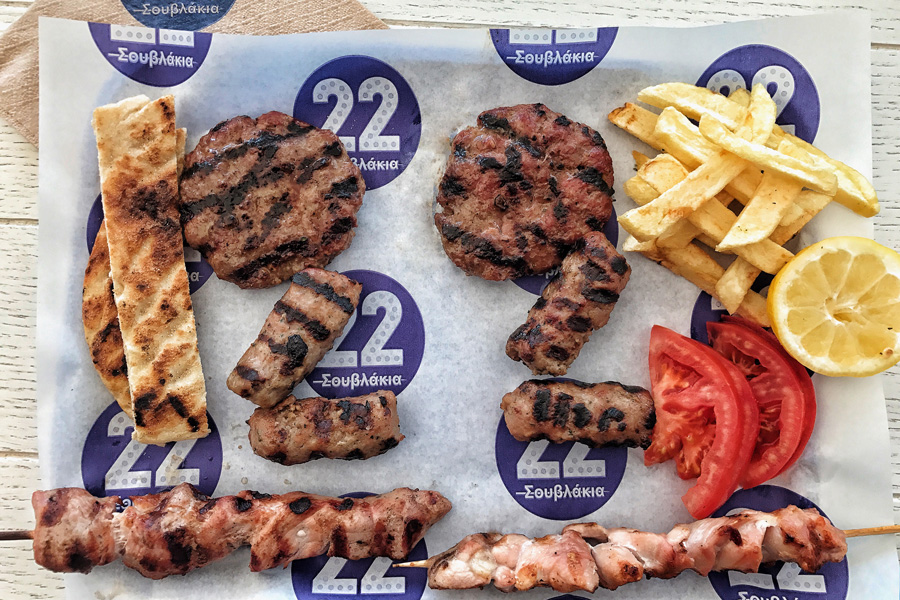 Dimitris sat with us and with his jokes he immediately brought a pleasant mood and smiles on our faces. Even though his company was filling, we needed two more things for our bliss to be complete…Souvlakia and beer. The order was in and within a few minutes the “party” had begun…The barbeque was lit and the luscious “monokavala”, the crocodiles (“dikavala”) and “trikavala” were getting prepared. But the surprises did not end there…There followed a platter with burgers, soutzoukakia, chops, chicken cuts and various garnishes, which accompanied our sumptuous meal. We won’t hide that we were mesmerized by the burgers, for which we will make many trips down town. Do not ask about the souvlakia… We mentioned before that they are a category on their own!! 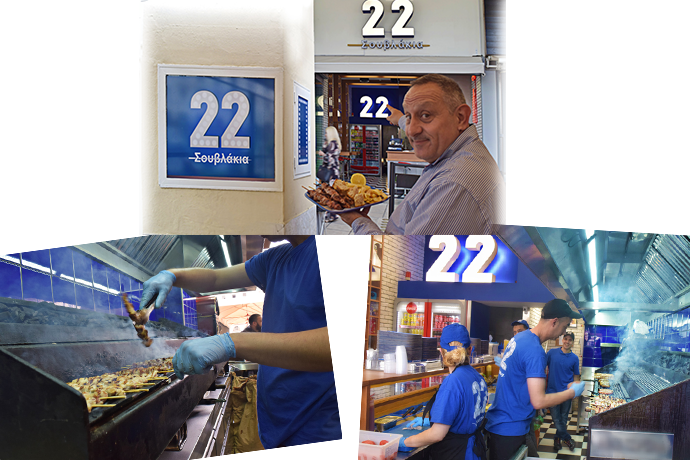 All the tastes that we experienced in the 22 Souvlakia restaurant left us with the best of impressions, as the quality of the meats, as well as all the materials used, is even better than the one we buy for home! (If someone thinks we are exaggerating, you should just go for a visit.)

The space and the service: 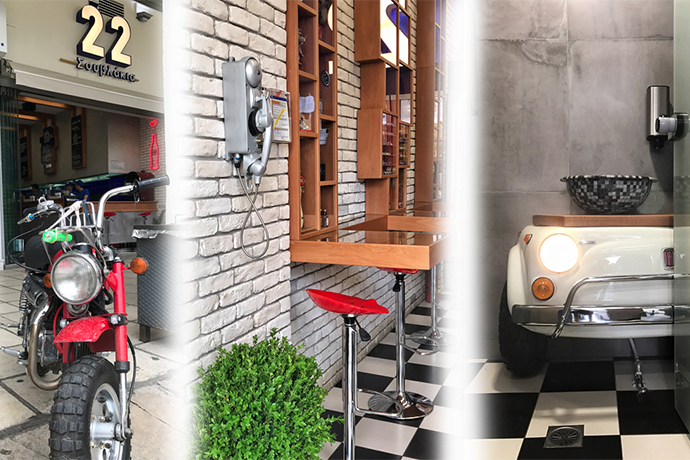 You can enjoy your food quickly or in leisurely manner in the charming exterior space, with a view of the world’s most beautiful square…the Aristotelous Square! The restaurant’s service, with the incredible Dimitris Ikosidios leading the way, could not be anything less than perfect, while prices are at reasonable levels, considering the quality offered. 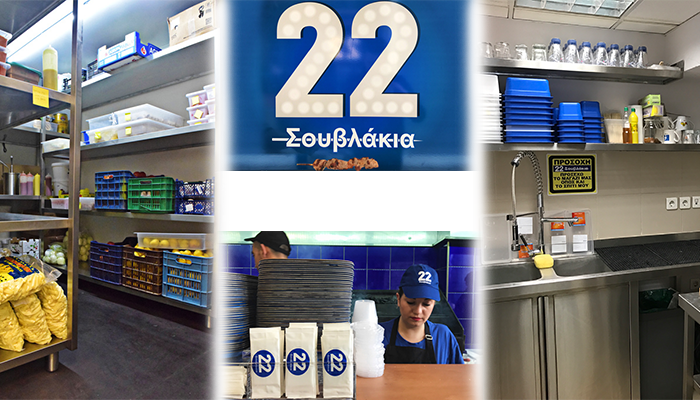 After we finished, on the menu was a walk in the “depths” of the restaurant…Where everything begins. In a huge space that could put the best of workshops to shame, the raw materials, with which the delicacies served are made, are prepared and stored. And while Dimitris was proudly talking to us about his creation, our eyes fell on something familiar. The always sharp and quick-witted Dimitris answered us before we even asked…”These are the chemicals I use on the Souvlakia! And which are these? Salt, oregano, paprika and chili flakes”! We were also extremely impressed by the fact that there are no deep-freezers in the restaurant, only state-of-the-art refrigerators, which keep the products for a few hours, before they end up on our table. 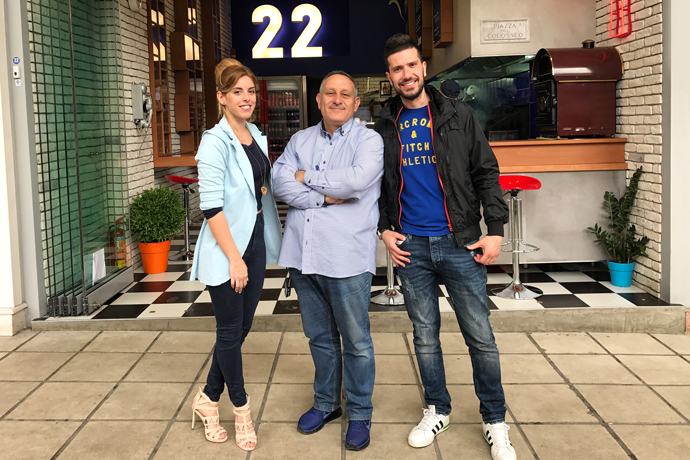 And don’t forget that the souvlaki of Thessaloniki is the biggest invention in the world…well, yeah, the wheel is also a nice invention, but the wheel does not go that well with beer! This is why it is heartily recommended to anyone wishing to enjoy an original Thessalonikian gastronomic experience…!

The 22 Souvlakia restaurant offers to all of its foodie readers a 10% discount with the code Travelen22.