Time started counting down. We wore our nice clothes (underneath all the jackets, coats and scarves, of course), we put on our festive hats and hit the streets accompanied by a glass of warm wine. People had already started gathering in the squares. Bands, DJs and orchestras were already hitting the first notes and shared their joy with the passers-by. Restaurants were preparing the festive tables and shining the champagne glasses. The smells from the food trucks were pulling the young and old like magnets. The city was lit and the first fireworks started to paint the sky with their colors, completing the festive atmosphere. Everyone had started dancing. Outside the Opera, the last act of The Bat was being played and we were running to the City Hall, where we squeezed in among the crowd and hugged each other. And time started counting down 5.. 4.. 3.. 2.. 1…

2016 was a difficult year for us and we wanted it to end with wonderful memories. So, we decided to spend its last moments in one of the hottest winter holidays destinations. The Austrian capital greeted us exactly as we expected. Like an Empress, with an exquisite sparkling dress and an imperial look. Sometimes distant, sometimes more approachable, enough to make you feel comfortable, as her guest. The streets and squares looked like vast halls, ready to host concerts, royal waltzes and folklore dances, while fine viands and drinks were offered generously at the outdoor buffets that had been set up around them. After all, it was her last reception of the year and everything had to be perfect.

With or without decorations, you will see it reflected on the “blue Danube”, gloating about the titles it has collected over the years. Cosmopolitan, sparkling, royal, elegant and cultured are some of the designations that it attests to at any moment. On first sight, it seems like it has stayed in another era, more traditional and conservative. With tall, massive and imposing buildings, palaces, villas and mansions, which, combined with the baroque architecture and decoration, demonstrate the excess and luxury that once dominated regal Vienna. But wandering around its neighborhoods, we quickly noticed that it has managed, indeed masterfully, to combine this tradition with the everyday, now modern life, without distorting its past. 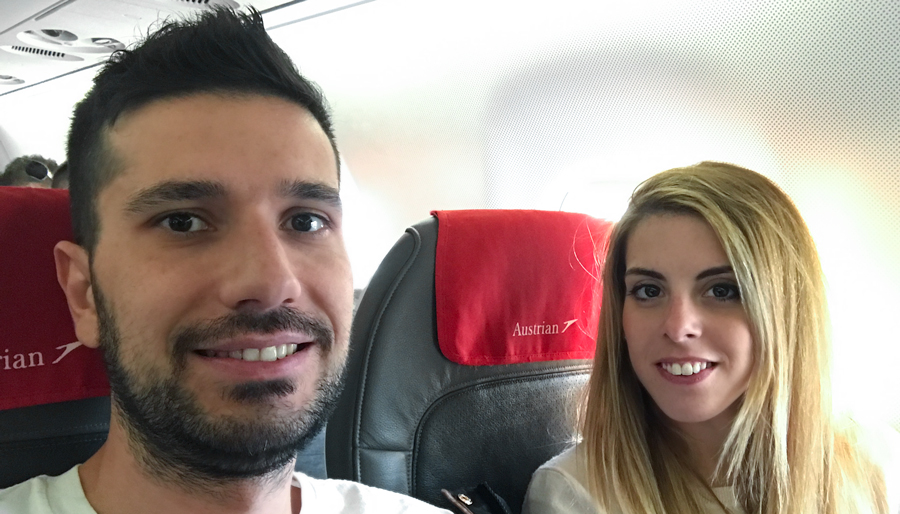 Vienna has to show an astonishing number of attractions, with most of them being gathered in its center. Museums and galleries with globally acclaimed artworks and collections, houses and statues of great artists, as well as churches with excellent architecture. Of course, the imperial palaces steal the thunder with the unbelievable luxury, the carved furniture, the porcelains, fancy dresses, vast rooms and immense gardens. Wherever we looked, we would find a palace. Small palace, big palace, country palace, palace for the Emperor, for his relatives, for his friends…the entire city is one big palace. And poor Nikos was wondering why I was shouting “When will I be a princess?”, while munching on a chocolate with the shape of Princess Sisi. A surreal scene! 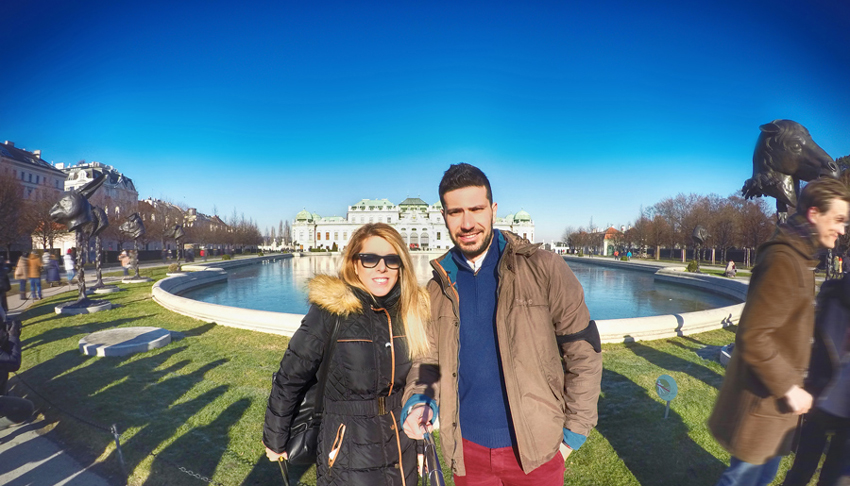 And now that I mentioned it…Sisi was everywhere. On T-shirts, hats, umbrellas, liqueurs, even on slippers! The obsession that they have with the princess is even greater than the one I have with food. Did I hear a peep?! But, to be honest, the Viennese cuisine did not leave us dissatisfied. Based on meat and sauces, it offered us many options when it came to meals. Delicious schnitzels fried with butter, sausages filled with cheese, soups and juicy ribs, were served even in the most high-scale restaurants. Our “light” diet was accompanied by local beers and wines, which, admittedly, we did not expect to like that much, while glühwein had become the extension of our hands. Soft spots are hard to hide…

The truth is that the food and warm wine were not the only temptations to which we indulged. Vienna, apart from everything else, is famed for its coffee, amazing chocolates and traditional desserts. E: Ah, this must be why they call it the city of dreams. Because there are wonderful sweets everywhere! N: I think that this label is owed to Freud! E: Don’t spoil my dream! But, he couldn’t even if he tried, because the fluffy cakes, fresh tarts, delicious strudels, crepes and chocolates decorated the patisseries’ windows. Among all these delicacies, we favored the famous Sachertorte, the Apfelstrudel, the Kaiserschmarren and, of course, the marvelous, thick chocolate with whipped cream. Flavors that were like classical music to our palates! N: Hmm, I don’t want to disappoint you, but what we’re hearing is Strauss. E: Come on, just follow my lead! 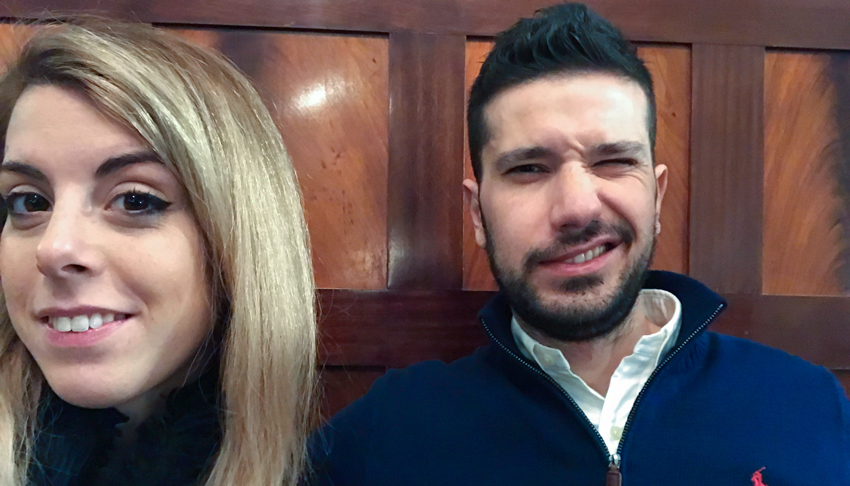 At the time we visited it, the whole city was like a giant concert. From the famous opera to the smallest squares, the orchestras and bands played melodies of recognized artists, who succeeded in Vienna. Strauss, Mozart, Beethoven and Schubert accompanied our coffee, meal, even our walks, making the atmosphere even more magical. But in the birthplace of music we did not only dance to the rhythm of the waltz, as the bars that the Viennese hang out listening to the sounds of pop, rock and jazz did not leave us unmoved. Furthermore, Vienna hosts music festivals and concerts with known artists, while the theaters and cinemas are an integral part of the Viennese culture.

“The best city in the world…”

Another thing that we kept from Vienna, apart from the Mozart chocolates that we packed in our suitcase, was the residents’ quality of life. N: How many did you get? I can’t close the suitcase! E: Let me go on and we will eat more back home…I mean, we will talk more back home! So, where were we? Oh, right! Everything seemed to run like clockwork, the city was clean, the means of public transport were always on time, while we felt safe even at night. It is not incidental, after all, that for many years now Vienna is voted as the best city in the world to live in. 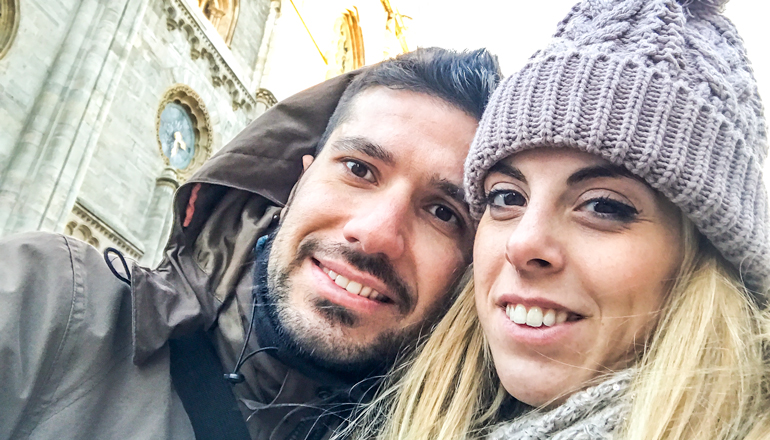 The only thing that we missed was the white veil, as not even the slightest snowflake dropped, while the sun blinded us from the first hours of the morning. Although it is a popular winter destination, many choose to visit it in spring, when everything is in bloom, the gardens come alive, while the weather encourages excursions. For conclusion, we do not have much to say, as Vienna, just like any other city, kept a piece of our travel life. It does not matter if it is smaller or bigger. What matters are the moments, the sounds, the smells, and of course the adventures we lived there! So, in a simple, plain and wonderful manner, with a glass of champagne, some Mozart and my man, a new, hopeful year greeted us…