Once upon a time, there was a city different from any other. It was built right next to Vltava River’s banks and was surrounded by castles and high walls. In this city, kings and princesses lived, protected by brave knights. Over there, time stopped and went by in different rhythms, thanks to renowned magicians, who produced all kinds of elixirs, in order to defeat it. The carriages and the horses’ clopping…”Helen, watch out!” he pulled me abruptly. “Hey, what happened?” I wondered aghast. “Where did you drift away to? You will be hit by the carriage!” Huh, I drifted away alright…Well, it wasn’t that hard, as I did not at all expect to meet a city like this, one that I would hear of only in fairy tales. For some it is the city of all cities, for Goethe the most beautiful jewel in the world, for us it is the one and only dreamy city of Prague!

“Maybe this was partly because of the mellow wine”

Maybe the knights were just makings of my imagination, but the golden city, which never loses its magic, was already dressed in its Christmas costume, inviting the young and the old to a joyous, Christmas party. Everything was decorated. Trees, buildings, shops and windows. Every square had its own Christmas market, with bands and dozens of gastronomical booths. Although it didn’t snow as much as it did in Budapest, the cold was quite palpable and our noses were always in a vivid shade of red. OK, maybe this was partly because of the mellow wine. But, in all fairness, it is not our fault…freezing cold and mulled wine with cinnamon and spices is a unique combination (watch the video). Still, the weather was ideal for wandering around during the heart of winter. (Double socks and the unparalleled style of being dressed like an onion also helped a great deal.) 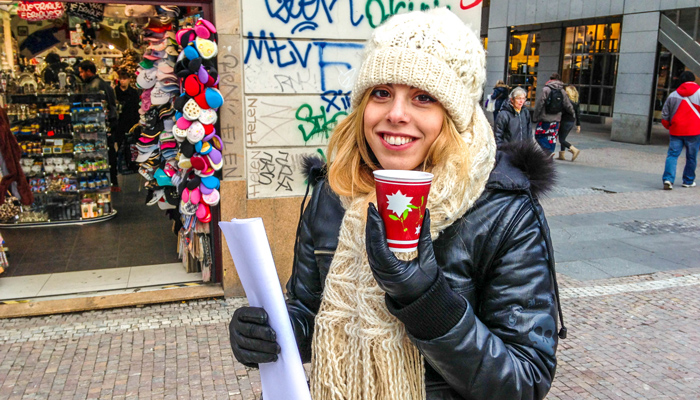 But even in low temperatures, Prague is perfect for walking. Distances are close, while there are routes, bridges and side streets that you cannot explore in any other way. Of course, for those that prefer a faster way of moving around, the city provides an organized network of transportation with buses, trams and the metro. We mostly used them when travelling from and to the hotel. During this trip, we chose not to rent bikes, because the streets are cobblestone, especially inside the historical center (just like in Bruges), and we were in no mood for being shaken like frappes! Instead, we did not miss the chance to hop on the 22 tram line and enjoy a delightful trip, meeting other neighborhoods and a different side of the city.

The Czech capital could be described as an open-air museum that constantly encourages the visitor to play with time and history. Besides, it is not incidental that a large part of the city belongs to the UNESCO list of World Heritage Sites. Towers, castles, forts, churches, monuments and statues appear in every corner and impress with their unique architecture. From the Powder Gate to the famous Astronomical Clock, and from the Charles Bridge to the citadel, it has managed to maintain to this day the medieval charm of the past. Nonetheless, it has evolved into a big urban center and has adjusted to the modern way of life, being one of the most famous tourist destinations. 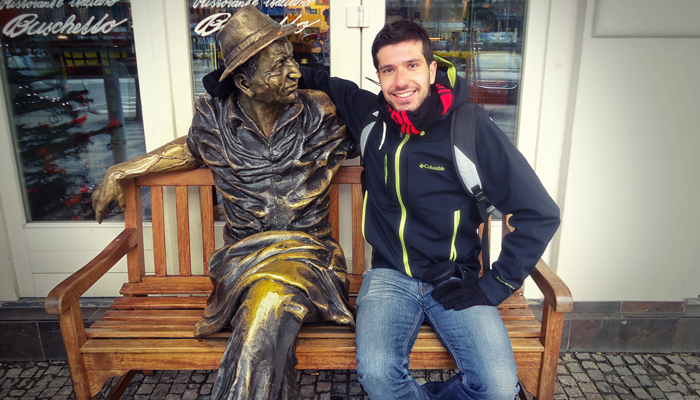 Unfortunately, some try to take advantage of this tourist growth in lawless manners. This was one of the reasons we were more cautious, especially in places with high visit rates. Generally, the residents do not seem to enjoy the hordes of tourists that flood their city daily, maybe because most of them prefer the quiet and peaceful Prague, the one that inspired poets, writers, musicians and scientists. However, it does not mean that they are distant and rude, just more hesitant and reserved with their actions and their words. Of course, this is also partly due to their poor knowledge of the English language. It would be best to know at least a few words in Czech, so you will be able to communicate for the basic stuff. However, if you consider them too much of tongue twisters, you can always resort to a more refreshing solution with guaranteed results. Drink beer!

If the Czech Republic is known for one thing, this is the fact that they have the highest percentage of beer consumption per capita in the world. That’s why it flows abundant in the capital, while in some cases it is even cheaper than water! If only we stayed a few more days, we are sure that even during breakfast we would ask for beer instead of coffee! You don’t even realize how you drink one after another and you end up singing songs about its beautiful golden vibrancy! Golden, dark, red, bitter, sweet, light, strong, even in odd flavors, it was the perfect accompaniment for every dish of the Czech cuisine.

Although during the Christmas holidays the street stands offer all kinds of delicacies, we could not say no to a well-done knuckle of ham, a warm goulash soup and of course the grilled sweet pastry called Trdelnik. The Czech cuisine is mainly based on meat and it is fatty, but very tasty and filling. In order to discover the original culinary traditions, we chose restaurants and taverns that tourists do not visit. In these shops we had the chance to try home-made food, but also get to know the locals’ customs. Although the Czech cuisine is greatly honored, one easily finds out that wandering around the city, you can find lots of other cuisines, equally tasty and affordable. 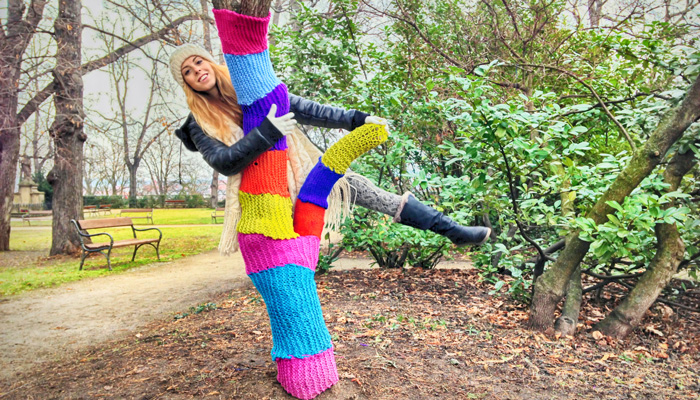 Prague, apart from bellies, knows how to fill every visitor’s box of experiences, as well. How is this accomplished? But, of course, with the entertainment it provides. Concerts, traditional music, opera, jazz bands, theater…black theater! No, it does not have to do with some kind of drama, but with a performance conducted in pitch darkness, with the protagonists being various formations of neon lights, accompanied by music and, many times, humorous sketches. It was a truly fascinating and unforgettable experience, which really immersed us in the people’s culture. But, at the very least, the city also respects the original night wanderers, with a plethora of pubs and clubs staying open until the first morning hours.

“Anyone who keeps the ability to see beauty never grows old.”

Although we only stayed for four days, we realized, from the very first moment, that the nymph of Vltava has the unique quality of captivating and filling the visitors with life and wonderful memories. We don’t think that there is someone who is not going to love Prague and all the magic it radiates. And as the great writer Franz Kafka said “Anyone who keeps the ability to see beauty never grows old.” We cannot decide whether his advice or the holiday atmosphere played a role, but the only certainty is that Prague conducted its alchemies and we had our most magical Christmas! (at least until the next one…) 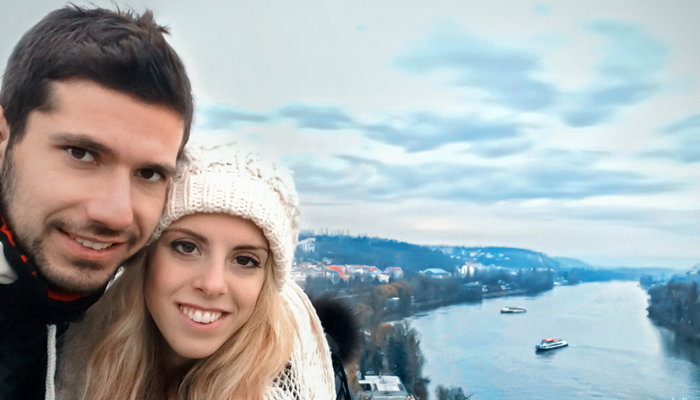