Elena: Are we there yet? Nikos: Do you see that skyscraper? Elena: Which one? Nikos: That swirly one? Elena: Wow, amazing! Nikos: We are almost there! Elena: That’s what you said half an hour ago! Nikos: Where are you going? Elena: I am not walking anymore! Nikos: And what are you going to do? Elena: Wait for the caravan. Nikos: What caravan? Elena: The one at 8:10…All these camels here, one will come by to pick us up! Oh, there’s one! Nikos: But that’s a taxi! Are you having illusions? Elena: It is not my fault, they are the same color! Nikos: And they are a bit faster! Elena: For your information, camels can run as fast as 65km/hour! Nikos: With you on them? Elena: Don’t think that this is the way to spoil my appetite! Nikos: I don’t think that I will ever manage to achieve something like that! Elena: You have a point. Nikos: Yeah, just one…! Elena: Did you say something? Nikos: Where should I tell the driver to take us? Elena: Do you see that skyscraper?…

“the first skyscrapers started to emerge”

The front guy’s snoring (See 12 types of people we meet on a plane) had waken us up for good, much earlier before we were to land in Dubai. So we had the chance to get a small taste of the city from above, as the sun was extending its first rays. And suddenly, beyond the blur of the sand (a permanent phenomenon in the city), the first skyscrapers started to emerge! It is magical. After the seemingly endless desert, skyscrapers just pop out and, suddenly, THE skyscraper, the one that instantly draws all eyes and the one you can see from anywhere. But it is not yet time to talk about it, since we are landiiiing (boom). Not even the shaking could wake this guy up? 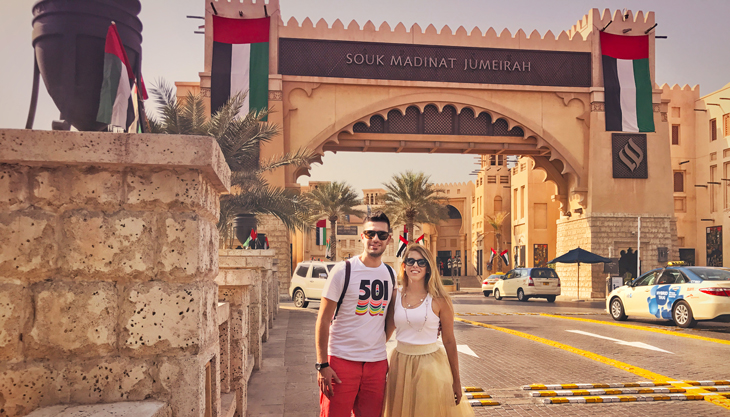 After the landing and as we were traveling by train to reach the gates of the airport (!!!), we saw something that we had never seen before. A deep red sun rising from the desert and painting the sky with extraordinary colors! We had barely opened our eyes and Dubai welcomed us in the most wonderful way…

The sun is a basic element of the city, as it is almost never absent from the sky. And how could it, since the average temperature in the summer is 38°C and 26°C in the winter! Of course, we got our dose of rain even there, but anyway. The month we chose was, obviously, December as temperatures during the summer season are unbearable. That’s why winter is considered the best season to visit it…Because you can move comfortably, without the danger of a heatstroke! And to be honest, I had always wanted to swim in the sea on Christmas…Australia was my dream, but it is kind of far away! Who knows what will happen in the future? Big Tips: a) Bring sunscreen for your face (daily use) and your body for the beach, the sun burns! b) No matter how strange it might sound, some nights a jacket is necessary, keep it in your bag! N: Tips do not go here! We have an entire category… E: Hon, let me save these people!

The first impressions of the city could easily be decoded by the reactions painted on our half-awake faces and from all the exclamations of admiration! Dropped jaw, aaah, oooh, wow and the like. Also, I must mention that our napes hurt by looking up at all the towering buildings and trying to focus on the dozens of Super cars that passed in front of us like bullets. I could not imagine that the days of the trip would pass by in the same fashion. And you would think that the days were few… We devoted nine whole days to Dubai, but fortunately we saw –almost- everything! 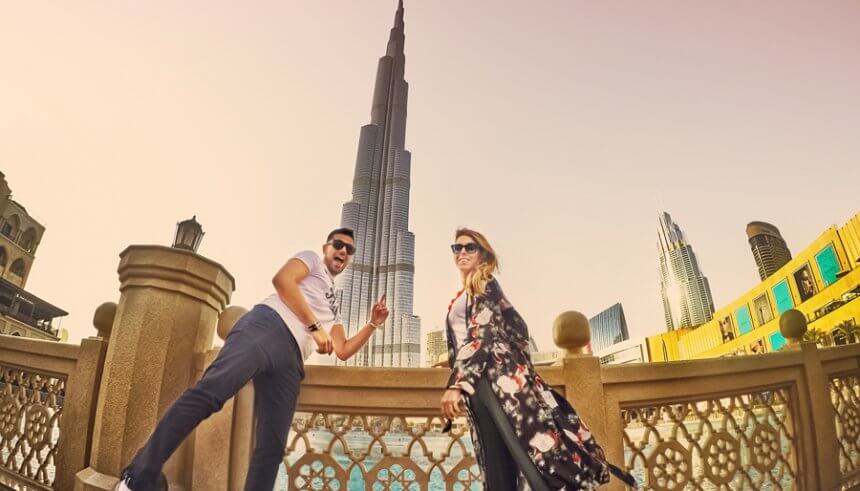 We got up to the 124th floor of the Burj Khalifa, spent an amazing night at the only 7-star hotel in the world, the Burj al Arab, played in the Global Village and got lost in the Miracle Garden. After we walked our legs off in the gigantic shopping center (Dubai Mall), we stepped out in its “yard” and watched the most playful fountains in the world that danced at the sounds of classical, pop and Arabic music. We spent many hours at the illuminated Downtown, dove in JBR along with camels and felt dizzy by the luxury at the Dubai Marina. A few more of the places that we picked out in the city are the Arabian resort of Madinat Jumeirah, the Battuta theme mall and the spices and gold traditional markets. Nikos had never haggled this much in his life. N: Even an Abra boat (traditional Arabic boat) was not big enough to carry all the things you bought home. E: You are exaggerating! What did I get? Some peppers, a few camel milk chocolates, some pashminas, a couple of cups…one…It is not to my advantage to say more, so I shall go on with the story…

“a city of contrasts”

From the first days we understood why Dubai is not a friendly city to those who want to walk. With distances being immense and every block taking up at least 20 minutes of walking, we grasped that nothing is close, although it might seem otherwise! Imagine that from our hotel we saw the Burj Khalifa as being so close that you thought you would cross the street and get in there! Think I am the only one saying this? 25 minutes of walking until we get there and not half a shed around to rest under the shade for a bit. I am done with walking, taxis for life! Let alone you find them everywhere, outside the hotel, malls, stores, on the street…With oil priced at 0.40€/liter and taxi fares starting at 1.1€, taxi is the best way to move around the city. Of course, let us not underestimate the metro, which came through for us on several occasions, transporting us from one side of the city to the other, or from one world to another. 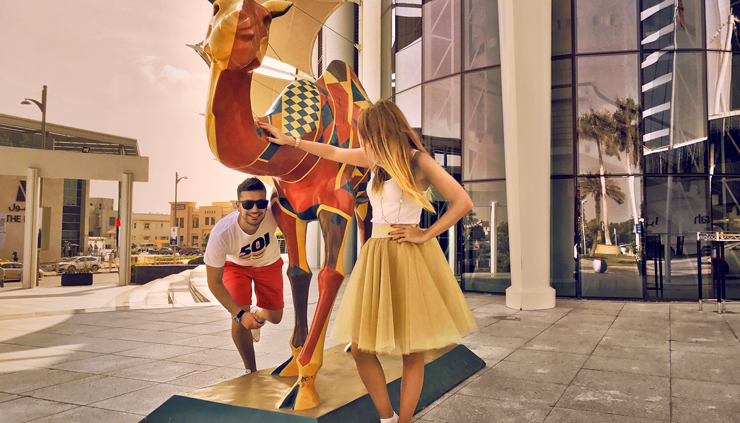 Dubai can be characterized as a city of contrasts, as around the Creek there are neighborhoods that remind nothing of Downtown, the luxury of Jumeirah Palm and other areas. In the Al Bastakiya neighborhood, from which Dubai came to be, we saw a whole other city, where residents wonder about what the meal of the next day is going to be and not their next Super Car. It was the place where we met the true culture of the Arab Emirate. Through an outstanding tour in the cultural center of the Sheikh, we learned about their religion, customs and practices, the traditional architecture and, of course, local cuisine specialties.

“one night in the desert”

N: Now you brought back some memories! Stews with eastern spices, meatloaf with rice, pies, hummus, falafels, kebab, tea, date fruit. E: Am I going to say anything? N: I don’t think there is something left… E: Of course, you devoured them all! Of course, it is understandable, as the local cuisine has many delicacies, while it is based on meat and camel milk. Once again, we preferred non-secular areas, such as Al Fahidi, Al Karama and Al Muraqqabat to try traditional dishes and desserts by the hands of the locals. But the city offers almost all world cuisines, as some of the most well-known chefs have been transferred to Dubai’s most luxurious hotels. As for us, to be completely honest, we never imagined that we would taste such delicious Greek flavors outside of Greece, but Ilias and Evangelia offered us a mythical meal!

Even though we were already filled with many experiences, there was no chance that we would leave Dubai without having tried the safari and spend at least one night in the desert. I don’t know where to start…With the fact that our jeep got stuck in the sand(!) and we had to dig it out of there, that Nikos’ Quad-bike capsized while he was trying to help someone else, that a camel sneezed on us while we were trying to take a selfie, or that I froze during the night? And I haven’t yet mentioned the show with the fires and dances, the endless conversations with the Sufi and the morning wake-up at 6 am to enjoy the unique spectacle of dawn. Now that I think about it, no matter what I tell you, it will be small compared to the adventure we had and the images we packed in our suitcases. 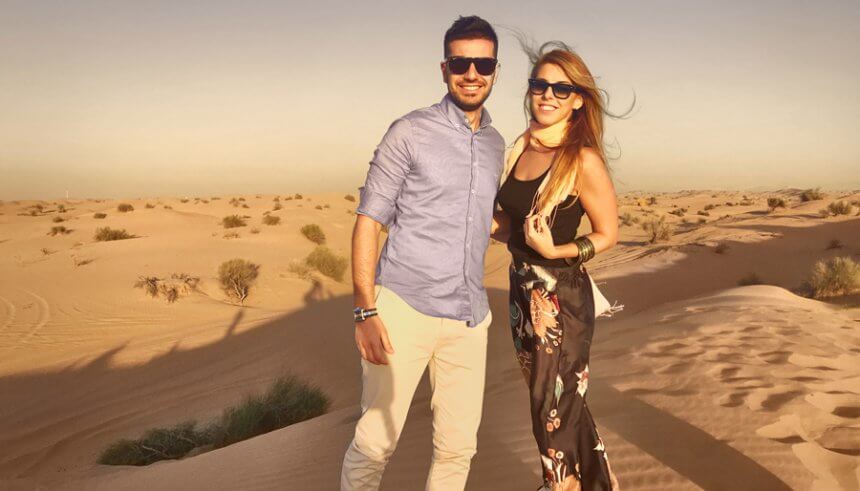 The emirate of Dubai built its castles in the sand, which is all there was before it turned into one of the most loved destinations. It used to be a superpower in the oil industry that started to dry up by the year. But they did not stay with their arms crossed. They invested more and more in luxury tourism. After all, this is why the whole city looks like an endless construction site! Skyscrapers, parks, malls, mansions, activities facilities and anything else that comes to mind are being built everywhere. Even outside the already constructed skyscrapers, there are cranes working on the prospect of making them even taller! The construction mania in the city is, of course, translated in many new job opportunities, as well as growth of tourist rates.

“Oh, look, there are camels in the sky”

During our trip, we also devoted one day to the richest of the seven emirates, the up-and-coming Abu Dhabi. The city is still in its early levels of tourism growth, but it is worth devoting one day to get to know it. And remember that in Abu Dhabi all that glitters…is gold!

While leaving I exclaimed “Oh, look, there are camels in the sky”. I don’t know if the cloud formations actually resembled camels that much…or if they had been so imprinted in my mind and eyes, that I saw them everywhere! Who knows? The mystery will be solved only if we go back…! N: With every destination, you always come up with some trick to reason going back at some point in the future! God is listening…E: Well I bet, since he is sitting next to me! N: Oh, you smooth talker. Aaalright, we’ll see! E: Yippee…Dubai, see you soon! 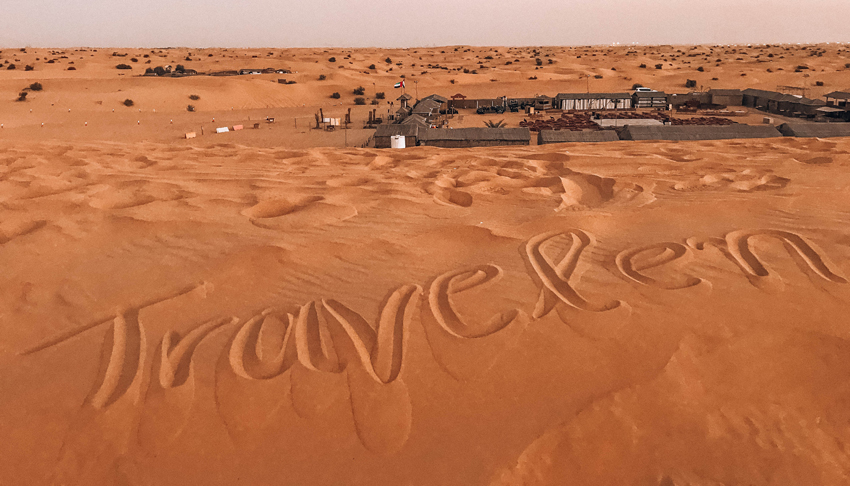