We made the decision to skip the traditional, Greek family meal on Christmas, though there is absolutely nothing like it, and spend our Christmas holidays abroad for the first time. After doing a bit of research on the web, we thought that Budapest would be the perfect winter holiday destination! As we discovered later, Christmas is always an amazing period to travel abroad and enjoy the spirit of each city, decorated in glistening lights and ornaments! Budapest is no exception, though the parts that were mostly decorated were the central squares; but it was still pretty spectacular! The buildings, the people, the smells, the lights and most of all Danube, all wrapped in holiday magic, filled our days with wonderful moments that turned into cherished memories!

But let’s take it from the top; we had an easy flight and the airport is 20km outside the city. We got a taxi to get to our hotel, Continental Zara Hotel Budapest, and the journey cost us 13€, after an arrangement with the driver that you can also make, including our luggage (which we think is very reasonable, considering that in Thessaloniki you pay 10€ for the same distance, without the luggage). We checked in at the hotel, left our suitcases and started exploring! A service in one of Budapest’s churches was all that we needed to get in the holiday spirit and the hymns’ melodies got stuck in our head and became the soundtracks of our whole trip! 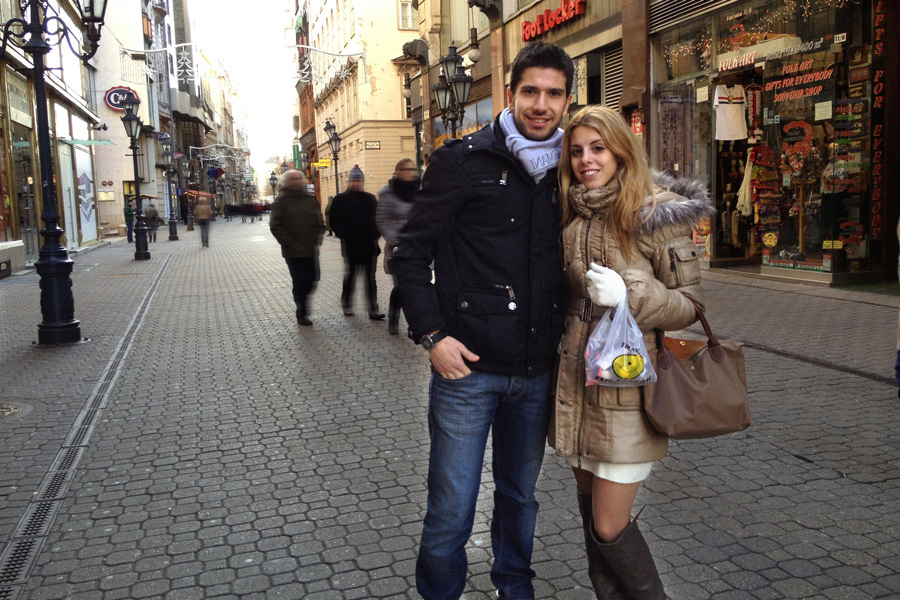 We managed to see most of the city in just 4 days, with a lot of walking and bike-riding and we still can’t decide which part is more beautiful: Buda or Pest? Each one has its own special kind of beauty, but the contrast between them, highlighted by Danube’s presence, is at the same time what brings them together in the form of an extraordinary city! What we agreed upon is that Budapest is a large city with lots of sites and attractions, but you can see them all in 4-5 days, if you regulate your time effectively.

“We blame the cold for that!”

What we set apart from our Christmas holidays in Budapest were the pathways and the view from the Gellert hill, the Chain Bridge, the view from the Intercontinental hotel, the decorated squares and the many canteens and food stands. I think that these stands are what really got us in the holiday mood! We ate all sorts of different sausages and drank so much gluhwein…we blame the cold for that! And the fact that it is simply delicious! Apart from these canteens, there are also a lot of cafés and restaurants for every budget, where you can have a taste of the local cuisine! But if you’re visiting the city during the same period as we did, keep in mind that on Christmas Eve and Christmas Day the food stands are closed and you won’t find a table available in any restaurant, unless you have made reservations. This was our experience, at least, and we found ourselves starving on Christmas Eve and reminiscing mommy’s stuffed turkey! We are truly grateful to our hotel’s staff that helped us get a table in a restaurant and we had dinner in Citadella, enjoying a traditional meal accompanied by the most breath-taking view of the city! 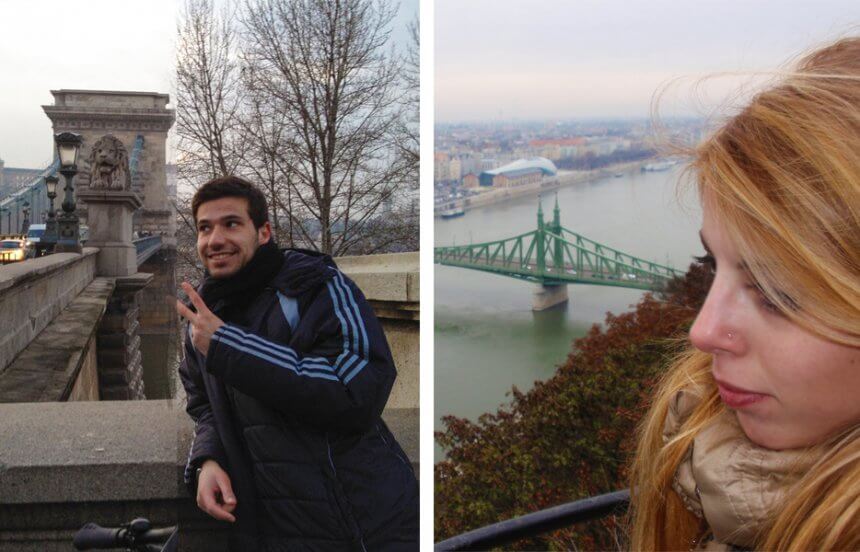 What was really exciting about this trip was the weather; who doesn’t love white Christmas?! Well, Nick probably isn’t that crazy about it, as his tasks included taking pictures of me (Helen speaking), which means that he had to take his gloves off all the time, while temperature ranged between -2°C and 5°C, and risked getting frostbites! That’s what he claims, at least…As for me, I had the best time posing for most of the 500 photos that we took in general (as we do in each one of our trips), while Nick may hardly appear in 50 of them…But that’s what you get for being such a talented photographer! Soon, true magic started to happen…snowflakes falling gracefully one by one, covered Budapest in the prettiest white cloak and wearing half of our wardrobe to stay warm was suddenly worth it! I LOVE white Christmas, and truth be told, so does Nick!

“We left a piece of our hearts there..”

Budapest is a low budget destination when it comes to accommodation, food and ticket costs as well. People are friendly, polite and willing to help and they try to do so, even if they don’t speak English. What left a huge positive impression on us was their general road traffic behavior, more than in any other city! To give you an example of what I mean, drivers stopped many meters away to let us go through a crosswalk, in which there were no traffic lights! Maybe this doesn’t seem as such a big deal, but in a similar situation in our hometown, drivers sometimes get confused and hit the gas pedal instead of the breaks! But we still love you, Thessaloniki, just the way you are!

There are plenty of means of transportation you can use in Budapest; tram, buses, taxis, bikes and the metro, which we discovered on the last day of our trip (epic fail), but next time we’ll know better! Still, choosing the bike to move through the city provided us with the freedom to wander around on our own terms. Of course, the infrastructure helped a great deal!

Would we visit Budapest again? 100% yes! Maybe in another season, maybe once more on Christmas…We left a piece of our hearts there, anyway, as it happens with every place we visit. We surely hope we get the chance to go back and discover more aspects of this fascinating city!