N: Don’t you think it is about time we found our next destination? E: Finally! I have something good on my mind, that we have been talking about for many years… N: And you believe that the time has finally come!? Noooo, I don’t want to go to China!! (With the voice of a little child that does not want to go to school after the holidays.) E: Actually, I didn’t have this in mind, but this dragon phobia has to come to an end at some point! N: Phew, I’m safe for now, but I don’t know for how much more! Well, I’m listening… E: Mediterranean city with unique architecture and the birthplace of famous artists. N: (Thinking) E: It is known for its cuisine and the delicious wine with bits of fruits. N: (Still thinking) E: Lionel Me… N: Are you for real?! We are going to the temple of football?! I will finally get to realize a dream that is on my personal bucket list?! We are going to Barcelonaaaaa! E: Vamos Barcelonaaaa!!! N+E: Meeeessi Meeeessi Meeessi! (Our home became a football stadium for a while.) 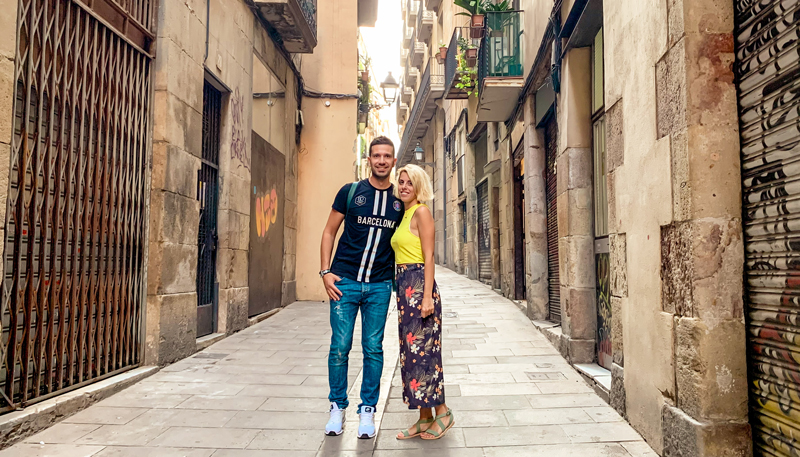 Barcelona was the destination that we wanted to visit for many years now, but for some inexplicable reasons we always put it off. But now the time has come… And the season is the best! Mid-September, with the temperature being ideal. The mornings are sunny and the evenings as cool as needed for the days to wrap up pleasantly. We did have one rainy day, but in the span of a 10-day trip, early autumn, it is normal. Also, the period that we visited it, one of the biggest festivals in the city was starting! Don’t rush! We are going to tell you about it further below..

Following in the footsteps of Florence, we decided to familiarize ourselves with Barcelona’s culture in a different way. So, from the first hours already, we would experience something unique, something exciting, something that some people travel from the other side of the world to see…We would watch a Barcelona match at Camp Nou! And to save you the trouble, yes, it might be a childhood dream for football enthusiasts and fans of the team, but it is also a unique experience for all. The atmosphere before, during and after the end of the match carries you away in the rhythms of the blaugrana and shows you how athleticism must really be like. A CELEBRATION. That night, we saw seven goals, we got photographed with fans of the opposite team, we sang the team’s anthem (don’t ask how) and returned to the hotel exhilarated and ready to explore the capital of Catalonia. 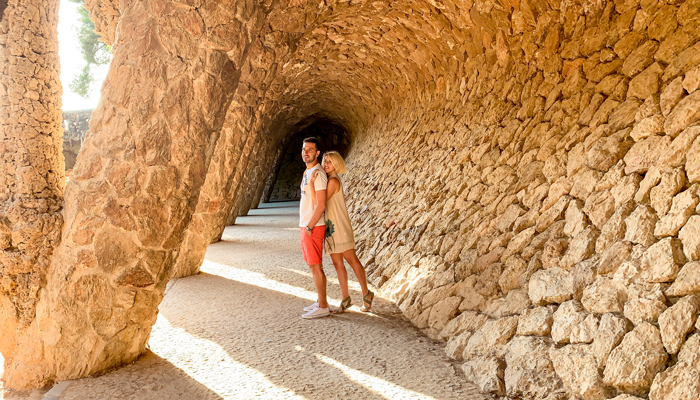 Like every city that has its own landmark, for example the Colosseum in Rome, the Eiffel Tower in Paris, the statue of Jesus in Rio de Janeiro and others, Barcelona is known for the Sagrada Familia, a unique church of 100+ years. The masterpiece of Antoni Gaudi, albeit incomplete, impresses both from the outside and the inside, with its architecture. If we could, we would still be there, admiring the colorful stained-glass windows, the tall columns and the bell towers, as well as the carved sculptures from the life of Jesus Christ. For us, it is definitely one of the two most beautiful and impressing churches in the world…the other one, of course, being that of Saint Basil in Moscow.

Apart from the Sagrada Familia, the bold, for his time, architect has also created more impressive buildings that adorn the streets of Barcelona, such as the Casa Milà (La Pedrera), the Casa Batlló, the Casa Vicens and the now Instagram-perfect Park Güell, where we got owned like rookies (read the Tips so that you go prepared). Walking around the city, we also saw works of other Spanish artists, like Juan Miró and Picasso, as well as important buildings such as the Barcelona Cathedral, the Sant Pau Hospital and the church of Saint Mary of the Sea. 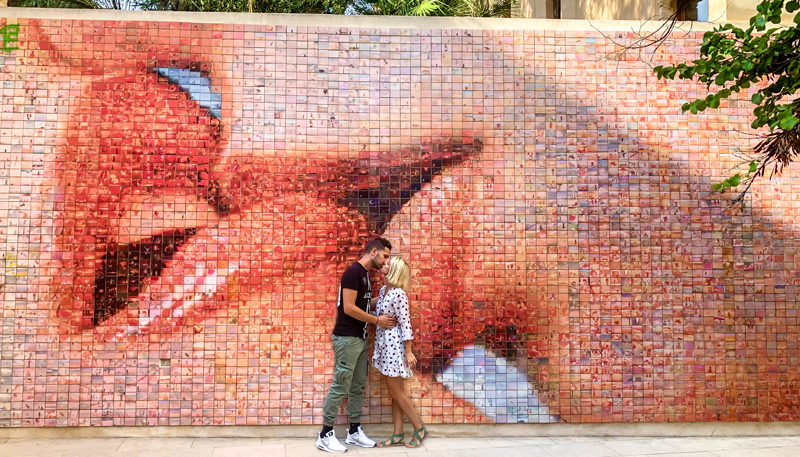 Although it is considered to be a relatively new city with impressive planning and huge streets, there are still plenty of neighborhoods where one can experience the Catalan culture. For example, at the Gothic Quarter with the cobblestone “labyrinth” and medieval houses, the El Born neighborhood, which is the youth’s hangout, the alternative Raval with the thousands of graffiti, even at the modern Gracia. Characteristic of all neighborhoods is the small balconies with the Catalan flags, as well as the colorful wooden doors. Also, we were impressed by the exotic beauty and the size of well-known spots, such as the Plaça Reial, the Catalonia Square, the Ciutadella Park and La Rambla walkway. But we loved a bit more its small, charming and well-hidden corners.

I imagine you have realized that the Spanish city is pretty vast, and that if you want to get to know it well, you should be ready for a lot of walking. The means of public transport are very helpful, but nothing beats your own two feet. Thus, we also engaged in some insane walking of 15-20km (!) a day, in order to manage to see everything. However, on this trip I was very lucky, as there was a store with Pinchos on every corner! As soon as I got tired, I made a 10-minute stop to regain my strength and then continued unscathed. N: Until you spotted the next store… E: Is it my fault that they were countless? N: You mean the stores or the Pinchos? E: Both! 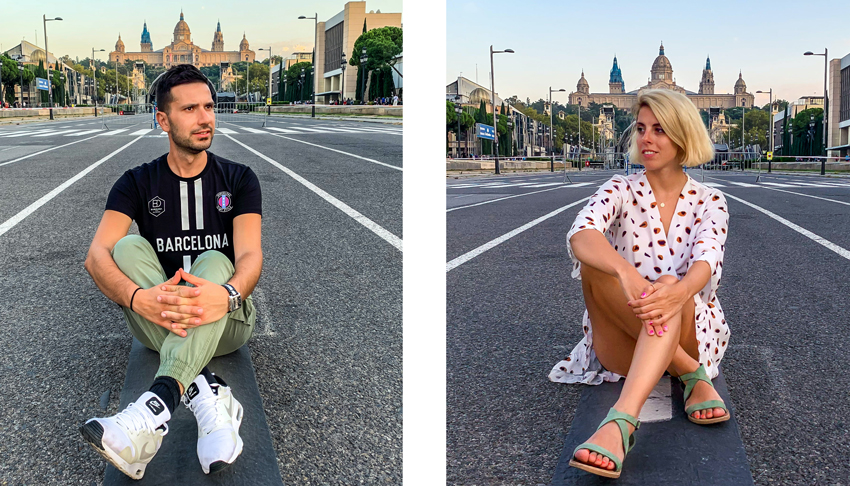 But you may be wondering what Pinchos are. Well, pinchos are, along with tapas, the most popular street food in Barcelona. They are small baguette slices, on top of which “sit” cheeses, vegetables, chicken, fish, olives, and even chocolate, fruit and caramels and anything else you can imagine, thus creating the perfect snack. Just a few bites, and habit quickly turned to love. We also felt love about the cuisine in general. And how could we resist the traditional seafood paella, the filled empanadas, the chorizo, the Patatas Bravas, the Spanish tortillas and the fresh fried fish? And what about this white and red sangria… We could drink pitchers and pitchers of it! But the point we broke down from pleasure was when we tried the Churros at Be Chocolat! The flavor, my God it was pure delight! We dipped them in the hot chocolate and then the only thing you could hear was crunch crunch and mmmmm. We can say with confidence that, along with the croissants that our friend Tonia recommended, they are among the best desserts we have ever tried on a trip.

And because many of you sent us messages wondering how we can eat all of these and not put on a single gram, it’s time to share our secret with you. Almost on every trip, apart from the hours long walking, we wake up a little before the sunrise and go jogging! Can you imagine the scene? The lights are not yet out, the sky is dimly lit, the people have not waken up, streets are empty and we run up Diagonal listening only to our breathing. Call us crazy but this is how in Barcelona I had one of the best experiences that I will never forget. N: I suppose that the others are the air-balloon ride in Cappadocia and the Christmas atmosphere in Moscow? E: Oh, yes!! But these are different stories. 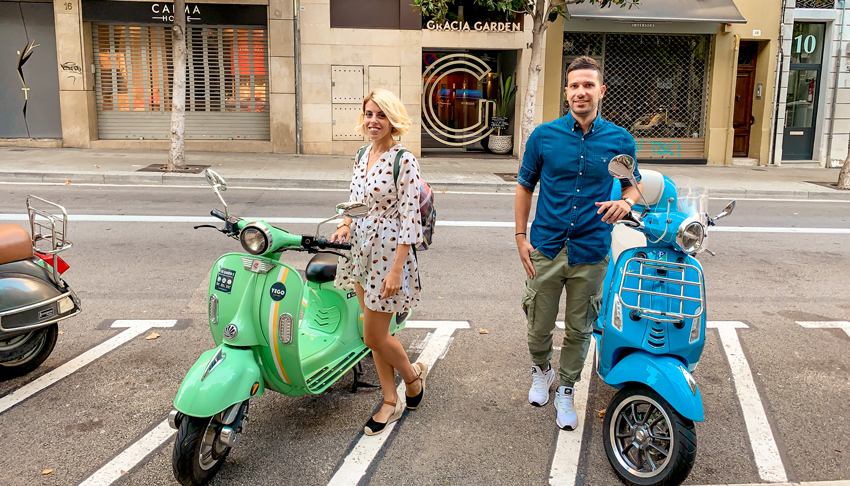 But Barcelona, apart from beautiful sunrises, also has magical sunsets. Even so when they are combined with the best view and a few glasses of Spanish wine or local beer. Every day we picked a different spot to watch the sunset, sometimes in the company of locals and other times by ourselves. On the abandoned Bunkers de Carmel Hill, at the top of Tibidabo and Montjuic mountain with the view of the city, on the steps of the National Art Museum of Catalonia with the magic fountains and the beautiful Plaça d’Espanya in the background, and of course at the Barceloneta beach with the dozens of fireworks that signal the start of the famous festival.

And we came to the big secret of our story, which goes by the name of La merce. Barcelona’s biggest festival comes alive every year, in late September. It is a five-day celebration through which Catalans honor the city’s patron saint and say goodbye to the summer. Squares and parks fill with bands, street artists, theatre and dance shows as well as exhibitions, while the streets host parades with giants, devils and…dragons! N: I had to endure them, after all. E: Maybe you should start getting ready for China? N: Not in your wildest dreams!

The festive atmosphere introduced us for good to the customs and traditions of the Catalan culture and changed our opinion a little about the locals, which up until that point did not resemble anything of the Mediterranean warmth and hospitality. We attribute this to their despair caused by the crowds of tourists that had “taken over” the city, as well as the internal political disputes. 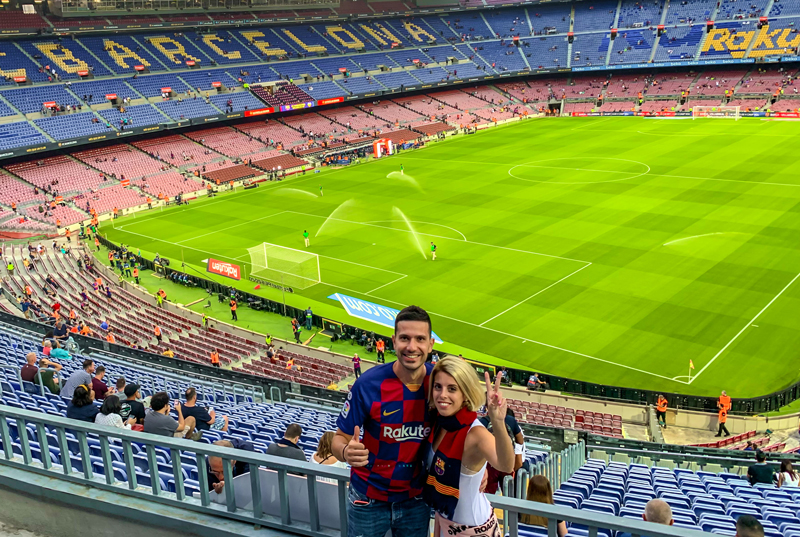 Our trip to the Catalan capital was combined with another Spanish town, the birthplace of one of the “craziest” and favorite artists. So, in Figueres we visited the house-museum of Salvador Dali, where we spent a few hours wondering…uh, admiring is what I wanted to say, the works of the eccentric painter, along with tons of tourist groups.

Wrapping up another travel story, we would say that Barcelona is a city to which you should devote plenty of days. Under no circumstances is it a 3-day destination, unless it is the 4th-5th time you are visiting it. We chose to stay for 10 days in order to get enough of it, and we still didn’t manage to do it. You see, it had been our aspiration for years now. This is why Barcelona had something completely different compared to all other trips until now. It already owned a piece of our heart..