While searching for the next destination, my eye was caught by a small islet in the Mediterranean. I zoom-in (haha, you thought that I was looking at an actual map, didn’t you?!) to see a little better what this dot between Europe and Africa actually is and, out of the blue, here is Malta! I had heard many things about it, but it was the first time I felt so intrigued. E: Let’s go to the island of the Knights! N: Great idea! Are seven days ok? E: Are you crazy? What are we going to do for seven days on an “islet”? N: A brilliant road-trip! E: I’m beginning to like this idea…Tell me more… 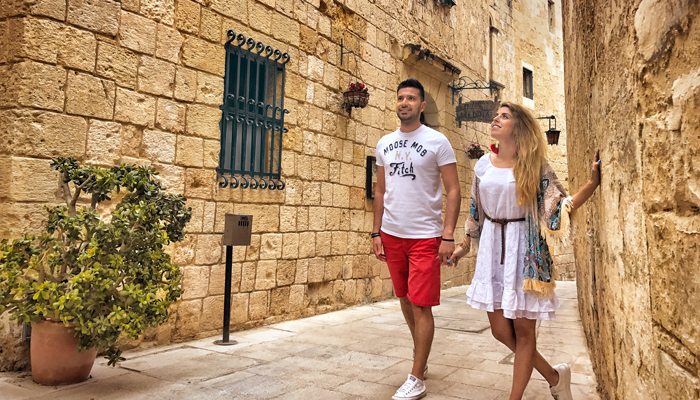 So here we are at Malta’s airport, waiting 1.5 hour for the car we rented. There was an accident on the road and we were told that it would run late. And as if this wasn’t enough, things were getting “better and better”. It had started raining cats and dogs! Where?! In Malta, where it is sunny 300 days a year. And since we are waiting anyway, let me open a parenthesis on weather. It is very unpredictable! One moment it is sunny and 30 degrees, and suddenly clouds form and it starts raining. Let alone rain is 50% dirt. When it stops and you look around, it is like there was a windstorm! I am still wondering why I brought all these bottles of sunscreen and four swimsuits. Parenthesis closed, the car is here.

“The road-trip In Malta had begun”

Ε: Where are you going? N: To the driver’s seat! E: Hmm…the wheel is over here on the right! N: Oops, I forgot! E: Are we sure about this road-trip? N: Yes, hon, trust me!! E: I see, it’s like I can hear it now “Young couple of travel bloggers was driving in Malta and crossed to the opposite traffic lane. Rumors say that the driver was reaching for the gearstick with his right hand!” N: Come on, get in and it will be unforgettable. E: This is what I’m afraid of! As you can imagine, it was the first time that we got a right-wheeled car. What followed was really special. Me, with one hand –and one eye- on the GPS, Nikos searching for the gears with the right hand and cars driving on the “opposite” lane. Truth be told, it is a really strange feeling, driving on the other side for the first time. You have known something for your whole life, which gets reversed. You think you are going to crash, that you are moving just wrong, you lose the sense of space (Nikos wrecked two mirrors before he figured it out)…but all is well! The road-trip in Malta had begun.. 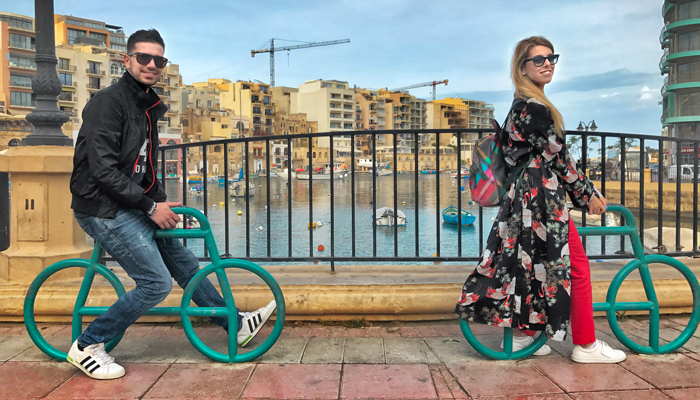 Malta might be small, but offers many things to see and do. After all, it is no coincidence that it attracts visitors by five times the number of its permanent residents! It is an archipelago, consisting of seven islands, among which only three are inhabited; Malta, Gozo and Comino. Distances are very short, considering that you need 40 minutes to get from one side of the island to the other, but transportation can be onerous, if you do not have a car. Buses on the island are not known for their consistency and frequency, so you should be armed with patience.

On the island you will find archaeological sites, fortresses, picturesque neighborhoods, fishing villages, impressive churches, beaches and amazing points with view. From the walk around the streets of Valletta and the dreamy beach of Blue Lagoon, to Marsaxlokk and the Popeye Village, Malta held our interest at high levels. We visited the “loaded” Co-Cathedral of St. John, the historic temples of Ggantija & Ħaġar Qim (5,700 years old) and the island’s most beautiful cave, Tal-Mixta. We had fun in the area of St. Julian’s that never sleeps, admired the geological phenomenon of Blue Grotto, climbed down our own Azure Window and got lost in the magic of Mdina. N: You forgot to mention the Three Cities, the traditional luzzu boats, the cannonades and many more. E: I did not forget, I just prefer for the pictures to speak for themselves in the DoDo & More categories! Check out here.. 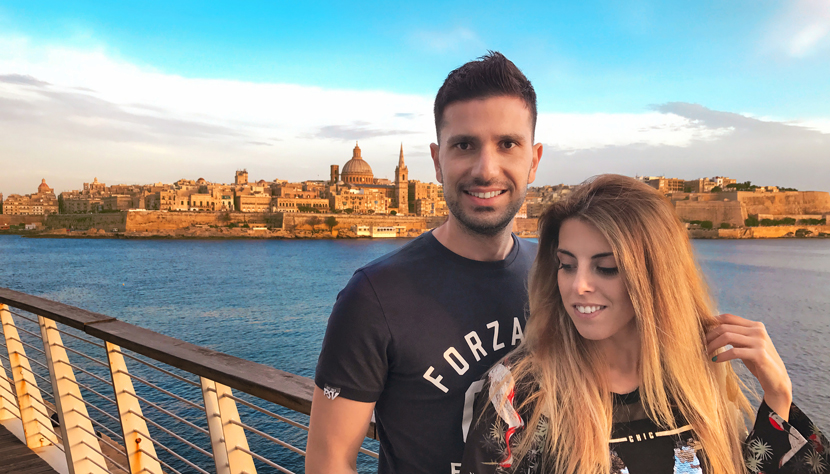 Every new trip, apart from new adventures and images, certainly has new…flavors! N: And I was wondering, aren’t you gonna say it? E: Now you are overreacting! The Maltese cuisine is an alloy of Arabic/Italian/English and other flavors. As a matter of fact, all the peoples that passed through the island left their mark on its cuisine, and you are asking me not to mention it? N: When you put it like that, it is justified! Well that was close…I will play it cool and gulp down my Cisk! And the local beer was not the only thing we tasted in Malta. What can I say about the freshly caught fish, the rabbit stew, the stuffed Bragioli, the Pastizzi with ricotta, the traditional Ftira and vegetarian Kapunata?! And as for the desserts… E: A traditional cannoli, some Pudina tal hobz, halva and a few of the incredible imqaret, please. N: Get us also three Kinnies (local refreshment), they will be needed! I still can’t decide if the secret of tastiness hides in the fresh products, the recipes or the love put in by local cooks.

The Maltese do not only love food. They love their land, customs, religion, as well as every foreigner coming to visit them. Their arms, homes and shops are open for everyone and they want for you to leave satisfied, no matter what. They are polite and discreet, while they speak English fluently, as they were part of the British Empire. Nonetheless, if you know a few Maltese words, such as Iva (Yes), Le (No), Bonġu (Good morning), Grazzi (Thank you), Jekk joghġbok (You’re welcome), Saħħa (Hello) they will greatly appreciate it. At the very least, you will have fun playing with the accent. 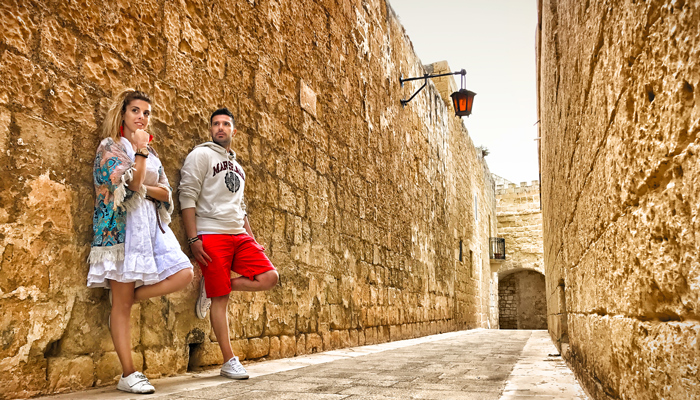 No, don’t worry; this will not be your only form of entertainment. Although most places in Malta quiet down after the sunset, night life is no stranger to the island. Every night, we would storm in the famous area of St. Julian’s, with the dozens of bars, clubs, casinos, pubs, restaurants, the very cheap drinks (50 shots for only 20€, 6 beers for only 10€ and more) and the profound flirtatious mood. The area reminded something of Malia and Faliraki in combination with Mykonos. Young people in the streets, decibels at high levels and barkers outside bars luring you with all kinds of free coupons, as the police were on patrol to maintain order. 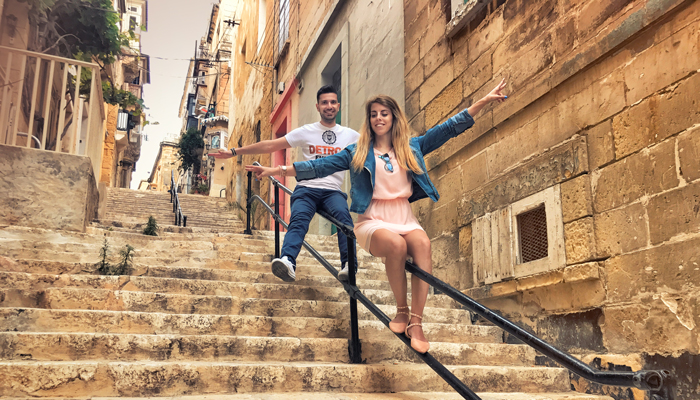 The idea of the 7-day road-trip was to be proven just right. We took our walks and our pictures, we visited all the islands and were cool with time! But we left the island with three unanswered questions…Why are there fast cars on the island, since the maximum speed limit is 80km/h, how can an orange soda taste like cola (Kinnie) and if the Maltesers chocolate candy has anything to do with Malta!! The islet in the Mediterranean proved to be ideal for holidays. Images are many, memories are even more, our pockets full of experiences and yet another trip crossed off of our bucket list!