Athens is known all over the world for its history and culture. It was also one of the most famous cities in ancient Greece, where it is said that science was born in the western world. Remnants of this golden age are everywhere in the city. All you have to do is to discover them!

About Vassilios:
I grew up in Athens, I love traveling but also writing about popular science. When I visit new places, I look for hidden gem cafes that help me relax and digest my new discoveries. This why I created a guide that presents some of the lesser known scientific monuments of Athens, such as the place where astronomical measurements were taken 2,500 years ago! At the same time, the guide informs you of science museums, planetariums and observatories. For each location I suggest a nearby cafe as one of my favourites to digest your newly acquired knowledge in. 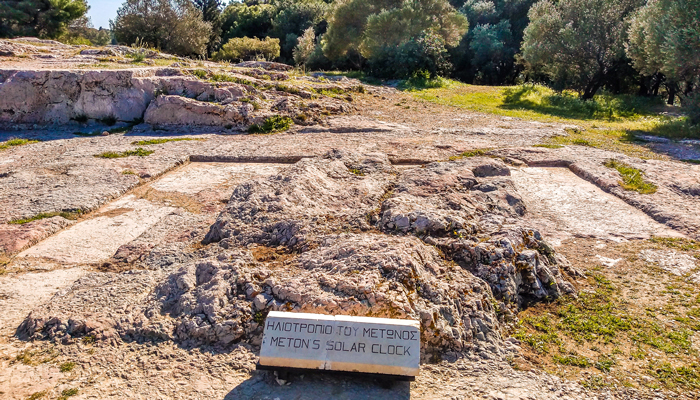 I will begin with the ancient Greek astronomer, Meton, who lived in Athens in the 5th century BC. He is most famous for the Metonic Cycle, an astronomical cycle on which calendars, such as the Jewish one (currently used mainly for Jewish religious festivals) and the calendar of the Christian orthodox church used to calculate the Easter date, are based on. 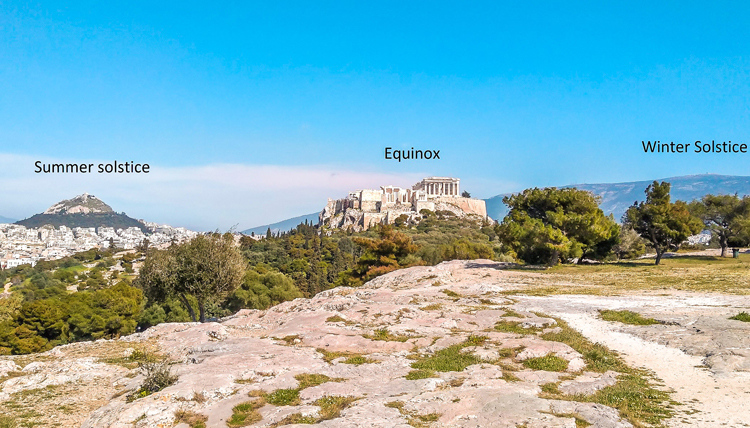 Historical sources report that Meton (along with his assistant Euktemon) placed an observation instrument (called the “heliotropion” or “helioscopion”) just above the podium on the Pnyx hill, where the ancient Athenians held their public assemblies. The site of ​​Meton’s Observatory is located on the hill of Pnyx, near the National Observatory of Athens. The visit is free of charge and a sign informs you of the presence of the observatory.

☕️ Suggested Cafe: The Museum of Islamic Art may not be directly related to science, but the beautifully decorated rooftop cafe is one of the hidden gems of Athens. Here you will also find a terrace overlooking this astronomical observatory! Address: 12, Dipylou Street, Athens 105 53
Mini tip: For access to the cafe is not necessary to enter the museum. 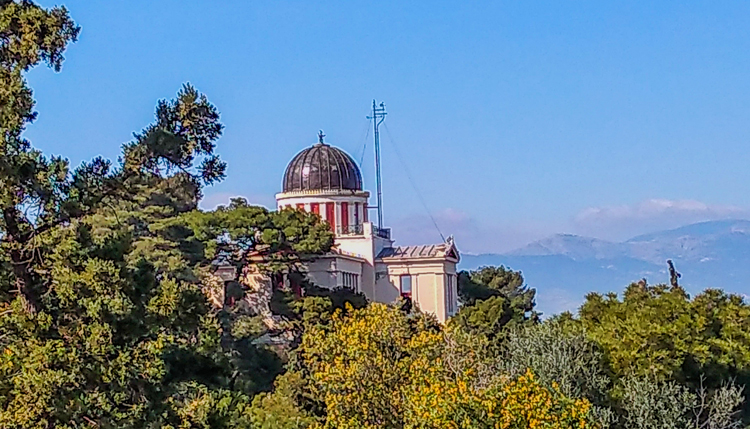 The exploration of Meton’s Observatory has shown us that ancient Greek astronomers played a central role in the advancement of astronomy. Following this tradition, the National Observatory of Athens, founded in 1842, was one of the first educational and research institutes of the modern Greek state. The main building is located on the hill of the Nymphs, next to the hill of Pnyx, where Meton had set up his own observatory centuries before.

The National Observatory of Athens ?:

The National Observatory has its own fascinating stories, such as that of the astronomer who designed one of the most accurate lunar maps of his time. For many years, it was also the point of reference by which, through observation of the sky, all the clocks of Athens were synchronized. For all this, but also for the unforgettable view, it is sure worth visiting!

☕️ Suggested Cafe: The place to digest a visit to an observatory should include a stunning view. One of the best spots for this is the Byron Hotel’s rooftop cafe. The views of Pnyx, Acropolis and Lycabettus are great and the prices are very reasonable. Address: 19 Vyronos Street, Athens 105 58

3) Sundial of the National Garden 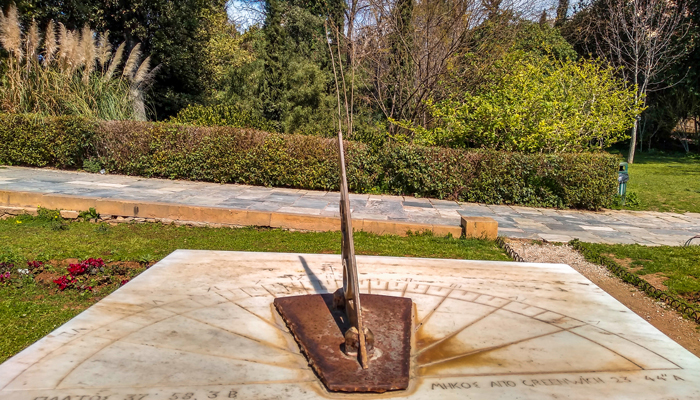 As we have already mentioned time measurement, let us talk about sundials, constructions that are based on the shadow of the sun to measure time. It is characteristic of the rich history of Athens that a sundial referred to as “modern” is actually almost 200 years old! It is located at the main entrance of the National Garden (formerly known as the Royal Garden), an oasis right in the city center over 15 hectares full of vegetation, rare plants and bird species.

The sundial initially decorated the palace of Otto von Wittelsbach, the first king of the modern Greek state, who reigned Greece from 1832 to 1862. Otto built his palace (the building in Syntagma Square which today is the Greek Parliament) in the 1840s. The sundial was placed as a decoration next to the marble staircase leading to the Royal Garden. After the monarchy was abolished and the Garden became accessible to the public (renamed National Garden), the famous solar clock was moved to its current location.

The sundial of the National Garden ?:

☕️ Suggested Cafe: Once you finish your walk in the National Garden, a good place to relax is Athens Cook. More a beer restaurant than a cafe is recommended to enjoy a cold frappe coffee on a hot summer day. Alternatively, try one of the local beers that even the god Dionysus would have enjoyed. Address: Nikis 20, Athens 105 57

4) Tower of the Winds 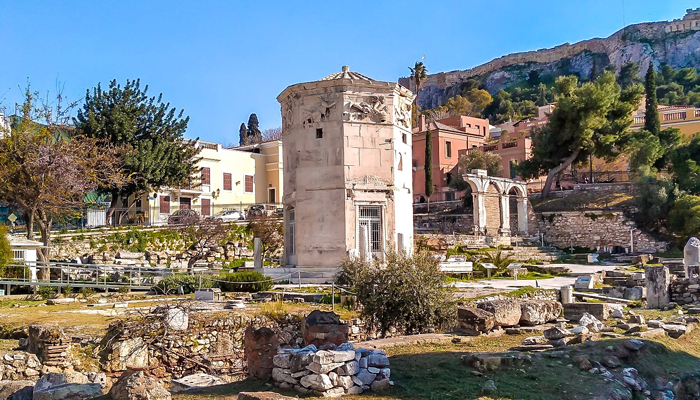 Many of you will have heard of one the most famous monuments of Athens, the Tower of the Winds. But how many realise that it was also the first meteorological station? The Horologion of Andronikos Kyrrhestes (the official name of the monument) was also used for astronomical observations as well as for the measurement of time. The name comes from its designer, Andronikos of Cyrrhus, who was an ancient Greek astronomer, engineer and architect, and possibly the sponsor for the construction of the monument. According to recent surveys, the Tower was built around 100 BC.

The Tower of the Winds ?:

☕️ Suggested Cafe: As a refuge from the Athenian winds (or possibly the hot sun), the nearby traditional cafe, Glykys, is recommended. With a beautiful outdoor area for the summer and a traditional stove burning indoors in the winter, it is an ideal place to rest after wandering in Plaka. Address: Aggelos Gerontas 2, Athens 105 58. 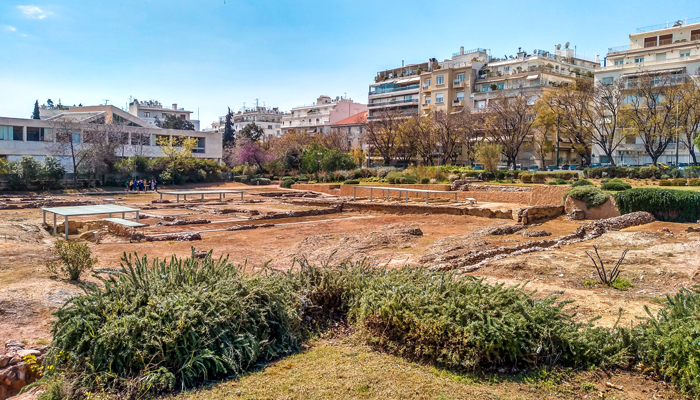 It is well known that apart from the sciences, ancient philosophy also flourished in Athens. Did you know that you can now visit the area where in 335 BC, Aristotle founded his Lyceum? The exact location of the Lyceum had remained unknown for centuries until it was discovered by excavations in 1996. Visiting the archaeological site of 11.5 acres, you can see and learn about the ruins of various constructions with the help of many information points. Moreover, it is an ideal place to relax or read in a beautiful setting, sitting on one of the many benches that have been installed all around.

We got to know some of the sites that are worth visiting in Athens, both for their beauty and for their fascinating scientific background. If you are excited to find new places off the tourist trail and if you are interested in scientific discoveries, then visit: http://www.mysciencewalks.com

To find out about the remaining 12 Scientific Secrets of Athens (17 in total)!