The dream of the East came one quiet afternoon like a fairytale, like Sehrazat’s 1000 & 1 nights, like it was brought by Aladdin on a magic carpet, like both of us wanted it for some time now!

In reality now:
One quiet afternoon in the living-room of our home…Nikos is singing as usual! N: “A camel from Algiers…the camel jockey’s camel, to a sweet African rhythm”. E: You are doing great, but you hit the mark only with Africa…if the camel was Moroccan you would be spot on. N: Is it what I think it is? Don’t tell me…E: Bingo! The next destination is set and loaded…We are off to Morocco, a country full of surprises, excitements and sharp contrasts! N: Finally! I’m going to pack my suitcase. E: Relax, we still have five months to go…but now that you have picked up steam, pack mine, too (you will need the time). 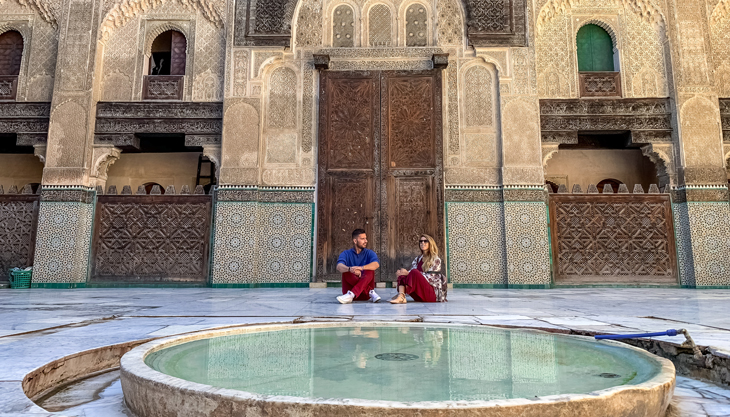 Five months later and here we are…flying over Algiers! It all started from a song to lead in a few minutes to Marrakech, the tourist capital of Morocco (the real one is Rabat). Of course, the first stop of our 11-day trip was Fez. Chefchaouen, Rabat, Marrakech and a 3-day tour in the desert were our next stops. Our goal…to get to know Morocco as best as we could, this unique African country with Oriental attitude.

were searching everywhere in the arrivals area for a pen!

The trip to Morocco, as many others, started off with adventure and trouble. If only for one time everything could go perfectly. Firstly, we were searching everywhere in the arrivals area for a pen(!) to fill out the form with our personal information that would get us into the country! And as if this wasn’t enough, we waited for 2.5 hours at the passports check, exchanged money, took our luggage, bought two sim cards, went through two more checks (luggage/passport) and took the car to leave in the pouring rain and drive (namely Nikos) 7 hours until we reached Fez…Woah! I listed them all in one breath! N: All? I guess you forgot what we went through when we reached Fez at 02:30 in the morning…E: Oh my! You mean when we thought that some strange Moroccans were after us with their motorbike and the poor guys were actually from the Riad and wanted to help us? Never mind, we are going to look like fools and not in vain! 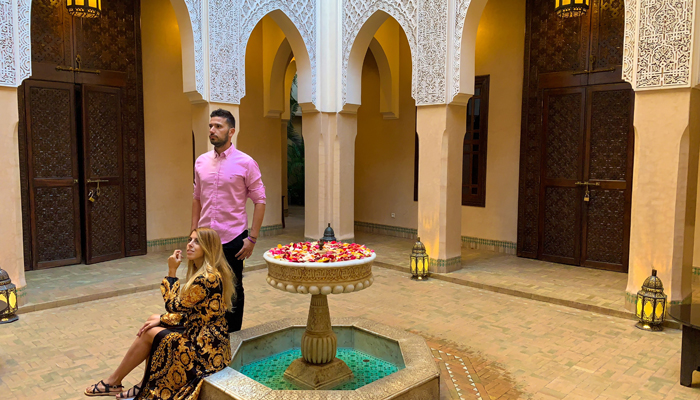 Even though it is located in North-Western Africa, Morocco has strong oriental influences. Towering minarets, palaces, Islamic universities, markets and impressive mosques are only a few of the things that will make you think you are in the depths of the Middle East. On the other hand, on your way you will come across gardens, buildings and entire areas with European standards and a more modern way of life. In any case, both aspects of the country offer unique images and render Morocco an once-in-a-lifetime destination. 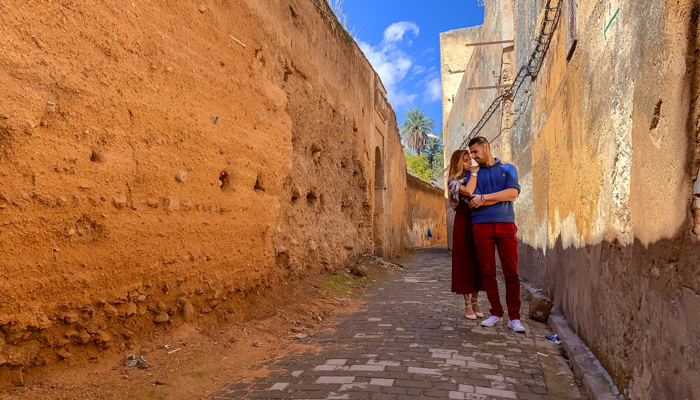 Among all the cities we visited, Fez and Chefchaouen won over a bigger piece of our hearts. The first one mesmerized us with the labyrinth and frenzied market, while we also saw (and smelled) for the first time the procedure of leather tanning at the tanneries and the special art of copper-forging. Morocco’s blue pearl, on the other hand, captivated us with its colorful Medina, the doors in every shade of blue, the quiet, the residents, the small narrow streets and the mouth-watering tajine. 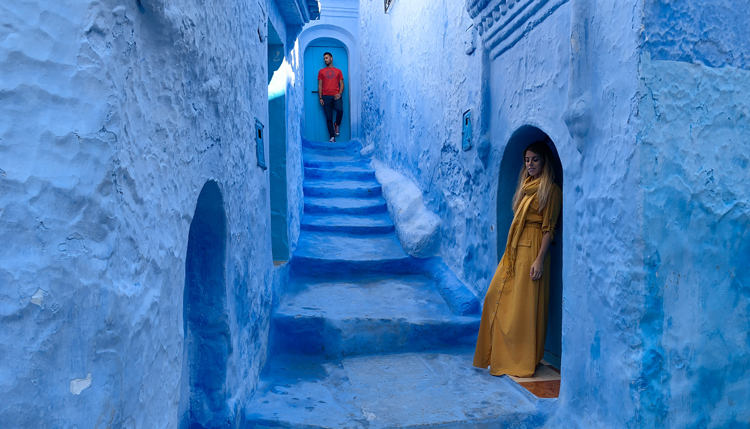 Half-way through our trip, the road led us to the Moroccan capital, which surprised us pleasantly. Rabat, although more cosmopolitan, still hides a traditional, lost in time past character. From the Medina to the Castle with the blue city, and from the glorious Mausoleum of Mohammed V to the Atlantic’s shore, we spent some of our most wonderful moments.

to the depths of the Sahara…

But the most unique experience was the 3-day safari in the Merzouga Desert. Just before finishing off exactly where everything had started, we literally ran to the mountains and the deserts. We climbed up and down the snow-clad mountaintops of Atlas, we passed through gorges and valleys, we learned how Argan oil is produced, we passed through Berber villages, we got photographed in Hollywood places and after a 10-hour journey we rode our camel, which led us to the depths of the Sahara. You may ask, what is the difference between this and the safari in Dubai? The fact that you feel you are in the middle of the largest desert in the world alone can make your skin crawl. But apart from this, we were lucky enough to enjoy the orange desert with the sunrise, sunset, rain as well as hail at the background!! Finally, it was there that we met the craziest company, with whom we spent an exhilarating evening. 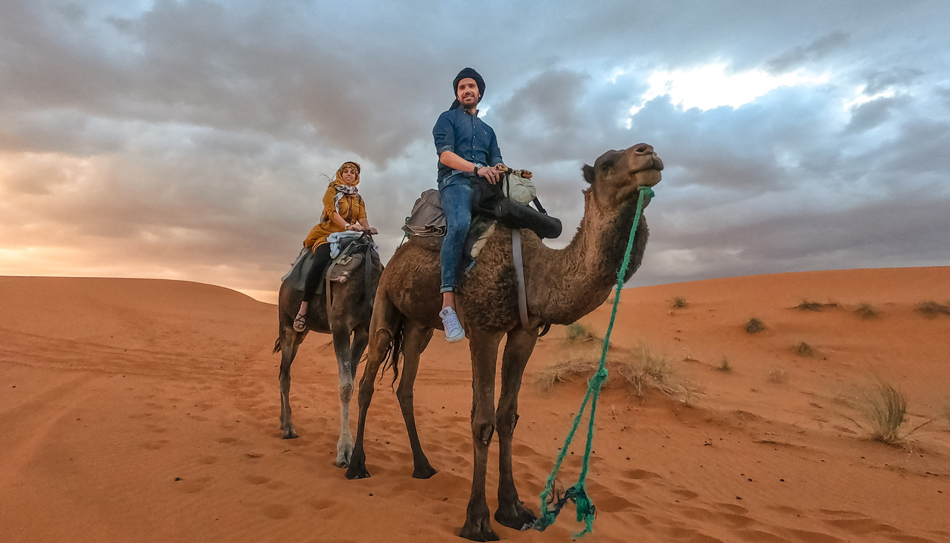 And after the exhausting but incredible tour, our last stop, the red city of Morocco. Marrakech may be chaotic and totally tourist-oriented but has a lot to offer to its visitor. In order to feel the rhythm of the city we started out at its landmark, the towering Koutoubia minaret and the Jemaa el-Fnaa Square with the snake charmers and stalls. Then, we once again got lost in the markets of the Medina for unbridled haggling. How did you think I got my bags, scarves, spices, glasses and lanterns? N: Can I answer? E: I have a feeling that I am going to regret it…N: Because I nearly got beaten up and did all the legwork to find what you wanted and returned with a headache just like in Dubai. E: I had to accept Ali’s marriage proposal, then you would see…I would be a sultana now! N: (bursts out in laughter)! OK, I already felt like a sultana because I was wandering inside luxurious Riads and glorious Moroccan palaces, but I am not telling him this!

The most useful life lesson we could have gotten…

Out trip to Morocco would be totally different if we had not rented our small, but convenient car. Without it we would not be able to stop at the villages and meet the country’s genuine character. Where houses are built from mud and straw, without electricity and basic comforts. Where children play barefooted in the mud and walk for miles to get to their school. And yet these people had something in common…They were smiling and felt unbelievable happiness with their few belongings. We experienced what we had seen in documentaries and this was the best part of the trip…The most useful life lesson we could have gotten! 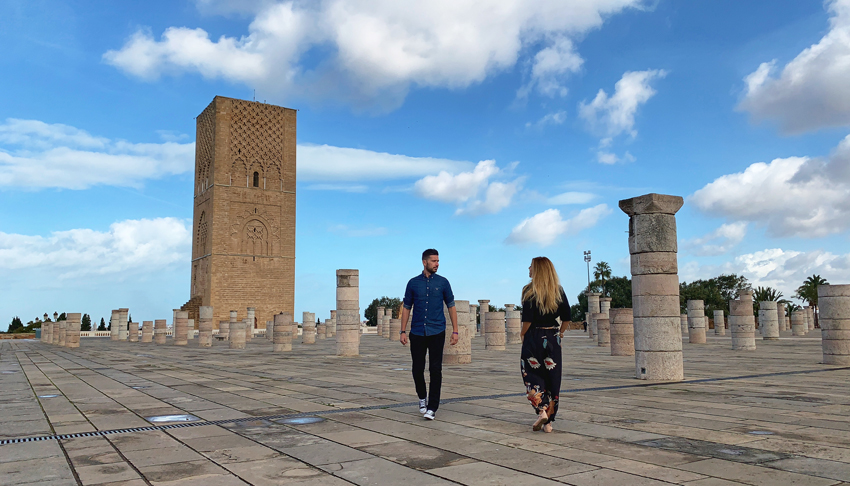 Of course, driving on non-central roads had its contingencies! The Moroccans drive like maniacs, defying every rule of driving, while at many points the two-way road becomes one-way…for two cars! We were just a few centimeters safe from the stones thrown by children playing rock fights in the villages, while we almost ran over half of the Moroccan population and around 350 chickens!

we never said no to the “Moroccan whiskey”…

And here’s something that you will not miss while in Morocco. Chicken…Hmm, and mint tea…and cumin…and eggs…and bread. What else does one need? We would not say that the Moroccan cuisine is one of the best we have tried, we should not, however, be unfair to street food! The forbidden (for many), junk food became our must! Wonderful bread/flatbread with a combination of two kinds of meat (sausage, minced beef, chicken), onion, egg and various vegetables, completed the exquisite, filling meal…for only 1€! Of course, we also tried the traditional tajine, couscous, baked vegetables and meatballs. The common ingredient in every dish is, of course, cumin. We would be exaggerating if we told you that the path to the Moroccan cuisine is paved with endless…cumin! Cumin in chicken, burgers, pies, omelets, with vegetables…even in desserts! Finally, we should tell you that we have no idea how many liters of mint tea we consumed in 11 days. At breakfast, lunch, dinner, to-go, at the café, in the mountains, in the desert, in cold or hot weather we never said no to the “Moroccan whiskey”. 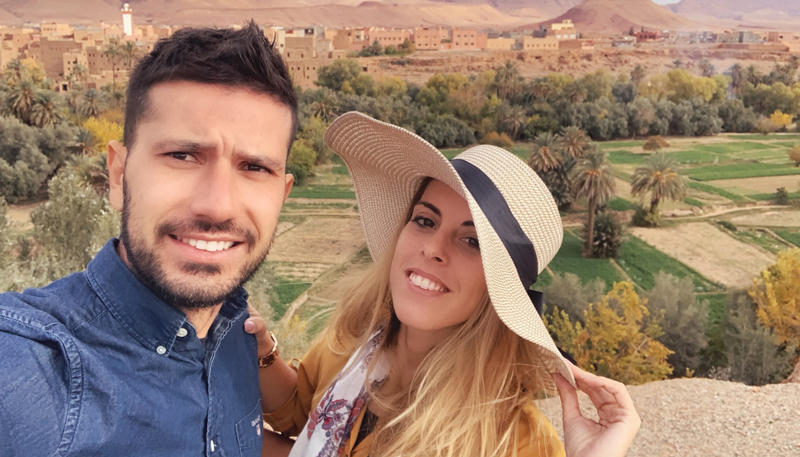 In one and a half weeks we traveled from Tangiers (opposite Spain) to the depths of the Sahara (near Algeria). We crossed rivers, mountains, waterfalls, cities, villages and deserts. We met wonderful people and saw a different side of the world. Morocco was not just a destination, but a life lesson for us. A lesson that we all should take in order to be able to appreciate what we have, as well as the journeys we take. E: I wish that at some point… N: You don’t even have to say it…At some point, you want to go back to Morocco! E: (Sigh)…to be continued…

Morocco: a song from Algiers! #not..