Nikos: So, here’s the plan…We get into Palazzo Pitti, we run to the Boboli gardens, we cross the secret passage, go through the Uffizi, see some Botticelli, move on to Palazzo Vecchio, find the Vasari painting, look for Dante’s mask and then run to the Cathedral to solve the mystery just like in the “Inferno” movie. Elena: Yeah, ok…I don’t want to disappoint you but the only “Inferno”-related thing that I’m going to solve is an inferno-baked pizza! Nikos: We go to the city of the Renaissance, the arts and mystery and you are still thinking about food? Elena: We go to the city of pizza, gelato and pasta. What else could I be thinking about?! Yet, if you want to, I can compromise and combine them! Nikos: Do I really have a choice?! Elena (cunning face): I guess not!

“Wine comes out from everywhere”

So, each with our own dreams, we couldn’t wait to reach the capital of Tuscany, the magical city of Florence! Meeting the city would have to wait a bit more, as the trip’s second stop –since we landed in Bologna– was Florence’s countryside and, more specifically, the wine-dominated Chianti. The amazing Fiat Cinquecento (500) we leased transported us in style and Italian finesse at the place where wine comes out from everywhere! Through dirt-roads, among cypresses and passing by endless vineyards, we watched the unraveling beauty of Tuscany, for which so many lines have been written. A wine tour might not be enough for us to get to know its every nook and cranny, but it was enough to learn about a part of the history of the place, take some photographs (like this one) and try dozens of wine tastes. But since Nikos was driving, I drank his glasses as well, so you can imagine how I got out of the tour…Yes, singing..

“Drink life as the wine and don’t ask for the time
Set fire to the present, we’re always in our prime! Hehe…Hic!” 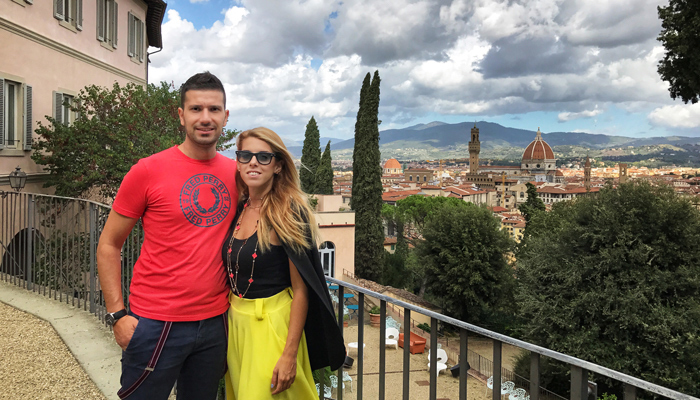 Luckily, the only thing that “caught fire” was our car, which ran at the dizzying speed of 30km/hour, through the quaint villages of Tuscany, in order to reach the city with the second most well-known tower in the world, Pisa. Arriving at the Square of Miracles, our eyes immediately met the one-of-a-kind leaning tower, which has no choice but to steal the show. Its inclination is so impressive, that for a moment we wondered if the Tuscan wine was to blame! Although it is a small city, it wasn’t hard to get away from the hordes of tourists and roam its alleys, the Arno, its small squares and taste local flavors. Even though the porchetta sandwich and the refreshing gelato we had made the ascent to the famous bell tower hard, they were delicious and filling. After we spent a few more pleasant hours taking the usual-known photographs, we once again started up our Fiat and left for Florence, this time via the known autostrada!

“We became one with the “Violas”

The first thing that someone would expect us to do in the city is a small tour in its historic center, or a taste of gelato, or at the very least a walk on Ponte Vecchio. But noooo…This time we preferred to first come together with the locals, learn about their culture, their habits and listen to their wonderful language. This is why we watched…a football match! So, in a festive atmosphere, we became one with the “Violas” and spent an unforgettable Florentine night. Even though all good things come to an end at some point…for us other things started, better ones! It was finally time for us to discover Florence! 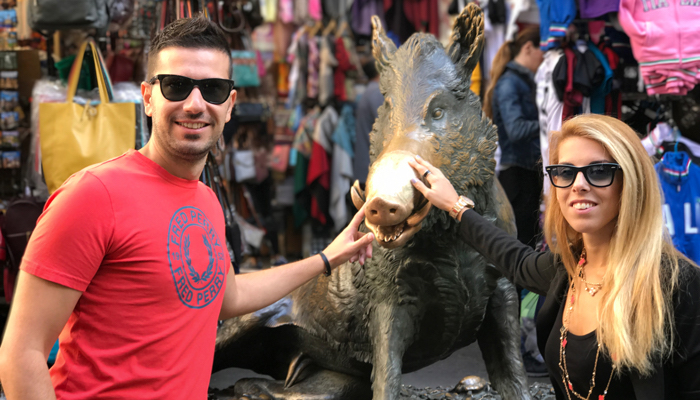 The city of the Medici welcomed us exactly the way we thought it would…beautiful neighborhoods, vivid Mediterranean temperament and an espresso in hand! Throughout the whole trip the weather was fair, as most days were sunny and warm, while it only rained without end for one and a half days! Of course, this did not discourage us at all, as in Florence there are so many museums, churches and galleries that you can’t stay outside even if you want to. And not only were they many in number, they also had thousands of exhibits to admire, so we devoted many hours on each one. So, don’t get fooled by its small size and think that you will see it all in a few hours. It entails plenty of walking among the architecture and the art of the Italian Renaissance.

Of course, in a city where artists like Michelangelo, Botticelli, Leonardo da Vinci and Dante did great things, and scientists such as Galileo and Machiavelli excelled, we expected nothing different. We are lost for words when it comes to this open-air art museum. What is there to say about the marble cathedral (Duomo) with the imposing dome (Cupola), the vast Ufizzi Gallery, the Accademia with the most beautiful sculpture in the world, Palazzo Vecchio with the secret passages, Palazzo Pitti with the wonderful gardens or the much-photographed Ponte Vecchio? In every neighborhood we walked, known or unknown, we gathered images of a bright era that left its mark on world history. 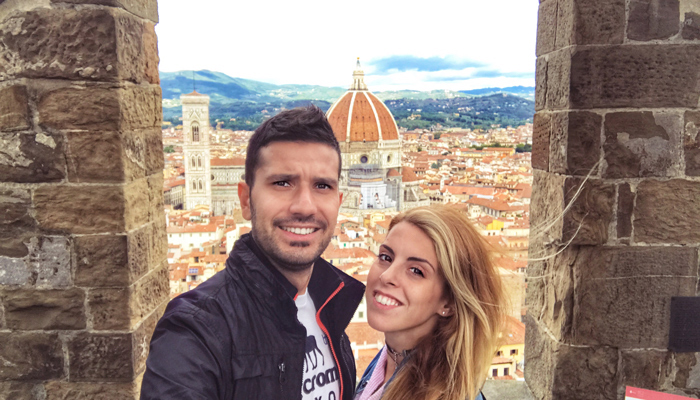 “The scenery had captivated us”

Yet, there is a spot that for us stands out a biiit more. It is not a museum, nor a building, but the huge Michelangelo Square with the most beautiful view of a city in the whole world! For this we devoted an entire afternoon, as the scenery had captivated us. Just imagine…The sunset painting Florence’s sky, and below it spreading the Arno River, the Duomo, Ponte Vecchio, Palazzio Vecchio, the Basilica of the Holy Cross (Santa Croce) and thousands of other buildings wrapped up in a golden-yellow color! My eyes could not be taken off of it, until a “weird” feeling started creeping up on me! Nikos: Are you hungry again? Eleni: Only a little bit. But I wouldn’t say no to a fresh ravioli with pesto or some tagliatelle carbonara or… Nikos: Ok, got it…! And as I continued reeling off dozens of other foods, we had already reached the other side of Oltrarno!

It is not a secret that on our trips we are always looking for special neighborhoods, wanting to escape the tourist clichés. This happened when we visited the other side of Oltrarno. Over there, we discovered a different Florence, simpler, more traditional, completely antithetical to the tourist mania of the historic center. You would certainly not call it quiet, especially at night, as the rhythm of entertainment beats there. It was there that we tried dishes of the Florentine cuisine such as the extraordinary bistecca alla Fiorentina, pasta in every form, local soups and, of course, our beloved pizza. Finally, it was where we spent the most delightful moments of the trip in the company of the locals, some music and a refreshing Aperol Spritz. 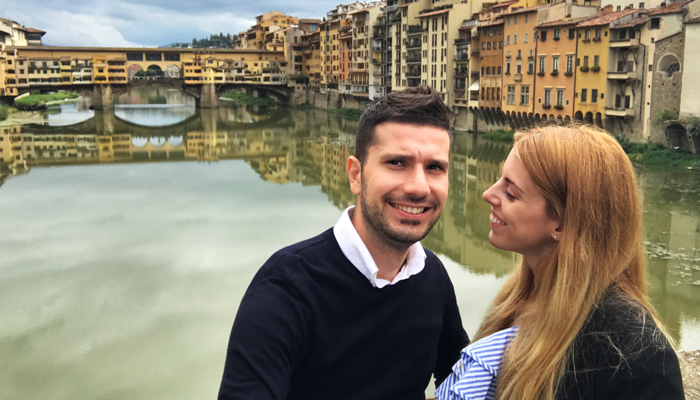 Apart from the local specialties, we paid tribute to Tuscany’s famous wines with the amazing fruity flavors, since we had studied their production process! And I should also mention the cappuccino that accompanied our daily breakfast and the espresso or the limoncello that helped with the digestion after so much binge-eating and drinking! The only thing that did not excite us that much, even though we were at its birthplace, was gelato! Bland flavors, small portions and quality that in no way reached the one of the legendary Frigidarium in Rome. But, no matter how much we ate, with so much walking and step-climbing, we returned to Thessaloniki -3 kilos! Hurray!!

“We were mesmerized by the sunset in Manarola”

The penultimate day of the journey started with a surprise trip. This time, we left Tuscany behind and set the GPS for the Liguria shore and the well-known Cinque Terre. A while later we were on the train that would take us, for the rest of the day, to the only fishing villages of the Italian Riviera. For those who love walking trails, the five villages are connected through paths, which many times are quite difficult! Due to time pressure, we did not manage to cross them all, but we got a small taste. We dove our feet in the white beach of Monterosso, we ate foccacia in Vernazza’s small harbor, we smelled the washed clothes in Corniglia’s alleys, we were mesmerized by the sunset in Manarola and exchanged vows of love outside the closed (unfortunately) Via del’ amore of Riomaggiore. Even though all the villages were crowded with tourists, we did not miss the chance to explore their picturesque streets, the colorful yards and lush green vineyards. And as we gazed at the colorful houses hanging on the steep Italian Riviera, Nikos’ voice came to spoil the fairytale… “Let’s go, the red city awaits us”! 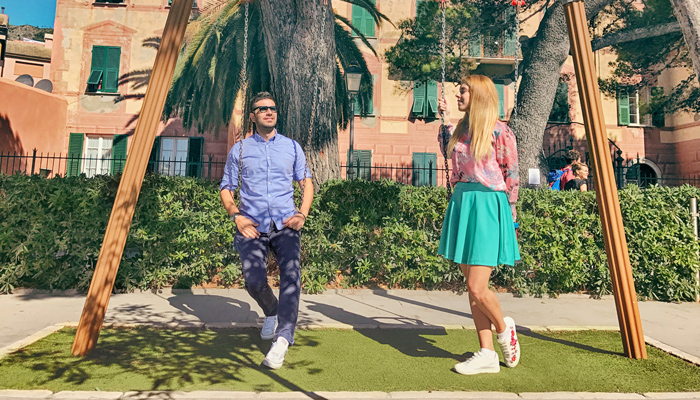 “If you do not visit Bologna, you haven’t met Italy”

Bologna awaited us to finish what we had started –upon our arrival-…Getting to know her! It took us six days, but as the saying goes, better late than never. The dawn greeted us all in red, as this is the color that prevails in the city! A city beautiful, lively and very simple, with a strong student community which you can meet any season you visit it, as you can protect yourself under its 40km arches. When it comes to food and entertainment, you can’t say a lot, only one word…Endless! The student-dominated Bologna is what Romans and Florentines were telling us…”our cities our beautiful, but if you do not visit Bologna, you haven’t met Italy”. For this reason, the city cannot be characterized as an escape from Florence, rather than an individual trip that has a lot to offer. It may not have famous galleries, impressive bridges and renowned sculptures, but it does have a uniqueness originating from the cuisine, the buildings, the vivid life and its rustic city center.

With these wonderful images, another one of our journeys came to an end. Even though we were feeling satisfied, at the same time we felt sad for leaving these amazing cities and regions of Italy. In each one, we lived special moments that we will always remember. Florence immersed us in the world of the Renaissance, Tuscany’s countryside showed us the path of the wine, Pisa realized a big dream of ours, Cinque Terre told us a colorful story and Bologna showed us the country’s genuine beauty! We could devote thousands of words that would still not be enough to describe to you all of our experiences…! But what we can promise is that our journey to the land of the Renaissance is not over yet..!