E: What do you think should be the next destination? N: Belgium! E: Brussels? N: No! E: Ghent? N: Nooo! E: Antwerp? N: Bruges! (In a French accent…) E: Are we going to play cards? (Obvious communication breakdown.) N: Not Bridge, Bruges…as in Brugge, how else can I say it? E: Where is that? N: In western Flanders? E: Where? N: Belgium! E: Oooh, is it going to have chocolate? N: Incorrigible as always! And just like that began the planning for another one of Travelen’s trips. We thought that Belgium has nothing more to offer us other than the capital, with the European Parliament, and its renowned chocolates. And that’s why everything we read about Bruges stirred our curiosity. Luckily, in our case, it didn’t kill the cat, but filled an important page in the book of our experiences.

“We literally walked alone amid the fog and the scant light”

At first glance and with a small walk around, one easily discovers why Bruges is known as the “little Venice of the North”. Canals, stone built bridges, lakes, colorful houses and cobblestone alleys are bound in harmony and compose a serene landscape. So serene, that you forget you are in a city of 120,000 people. The first time we visited it, we arrived at night and the city was desolate. We literally walked alone amid the fog and the scant light. But, the weird part, in relation to other European cities was that we felt safe even in those hours. We had read that crime rates in the city were close to 0% and a walk was enough for us to realize it. Apartments on ground floors with keys on the doors, wide open windows, unlocked bikes and cars, are images that you don’t see anymore, even in the most secluded villages. 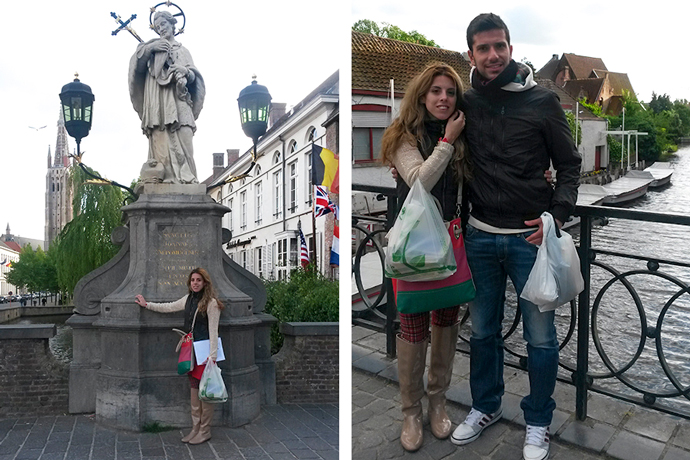 This safety is reflected also on the faces of the residents, who move around in relaxed rhythms, free of stress and rush. Even though Bruges has started to gain ground in the tourist front, they do not seem concerned or suspicious towards tourists. They are polite, attentive and do not hesitate to give you a smile or a warm hello. But what impressed us incredibly was their discretion. We walked in the alleys and saw that in every house the curtains were open and you could see at any moment what anyone was doing. But, still, not a single passer-by would even for a bit turn their gaze and look inside. In Greece, you open the window for just a bit and miss Toula, the neighbor, can already tell what you’re wearing, what you’re going to eat and where you will be in 10 years! We know, we know, this is social interest. In any case, Bruggians care about their own household, love their city, keep it clean, while they do not miss the chance to participate in activities, even on cold and rainy days.

“What good are T-shirts and mini-skirts when it is 8°C?!”

We would not say that Bruges’ climate is one of our favorite. Most days of the year it is rainy, while the humidity and wind make the cold pretty palpable. Even in the summer, the temperature rarely goes over 20°C, while the sun often plays hide-and-seek with the clouds. In the spring, mid-May to be exact, when we visited, we have to tell you that a whole suitcase was not enough to warm our bones. What good are T-shirts and mini-skirts when it is 8°C?! The best period to visit it is Spring to Autumn. Not because of the weather, but because it is then that nature wraps the city in the most wonderful of colors and it is easier to get used to the melancholic atmosphere. In any case, an umbrella or a raincoat is necessary for your sightseeing. 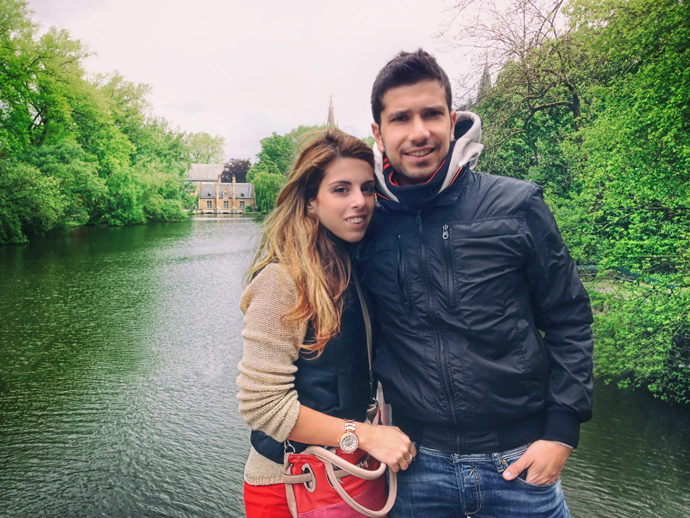 Bruges is a small town and you can easily walk around it on foot. Distances are close, you are in no danger of getting lost, while it is the best way to discover canals, streets, hidden attractions and various corners of the city. Most residents move around by bike, and naturally, as the mighty cyclists we are, we also tried to explore it on our bicycle. Endless bike-lanes, only a few uphill routes, bridges only for bikes and a little judder in the cobbled streets of the historic center, made our ride pretty relaxed and fun. In the city you will not find metro or tram networks, but you can use the bus, taxi, car or tourist van. Finally, a cruise in the canals or a romantic carriage ride can turn back time and guide you through various routes in medieval Bruges.

“I even managed to get chocolate out of my head..”

Although it became known through the movie In Bruges, starring the beloved Colin Farrell trying to slip through its cobbled streets, it was one of the most well-known commercial centers for fabrics and gemstones. The prosperity and wealth of the time (13th – 15th cent.) were depicted in its architecture, history and culture. Luckily, we can still admire it today, as the Belgian city has managed to maintain the beauty and glory of that era intact. With the imposing Belfort bell tower as a background, the colorful houses in the squares, the churches, towers, gates and of course the canals’ bridges, every image of the city looks like a medieval postcard. The dreamy scenery is completed by the windmills and parks with the lakes, swans and their thick vegetation. On every corner, your gaze gets stuck and your mind empty.

I even managed to get chocolate out of my head…Although just for a little bit. To be exact, just for a few moments, as it is really hard for someone to forget the Belgian chocolates, especially when you come across a chocolate shop on every block. As hardcore fans of the delicacy, we tried it in every form. Hand-made, pre-packaged, hot, cold, as a beverage, white, black, milk, spicy (!), with fruits and anything else you can imagine. And when it was combined with a fresh waffle and strawberries it was mmm…a sweet sin. Helen could simply not share it! (As it usually happens anyway…) Aside from chocolates, Belgians also love meat. In the city you will find lots of restaurants with Flemish specialties, most of which are tasty but a little heavy. Although its most famous dish is steaming mussels (the most delicious were the ones in Paris), we fell in love with the ribs and the Flemish stew. 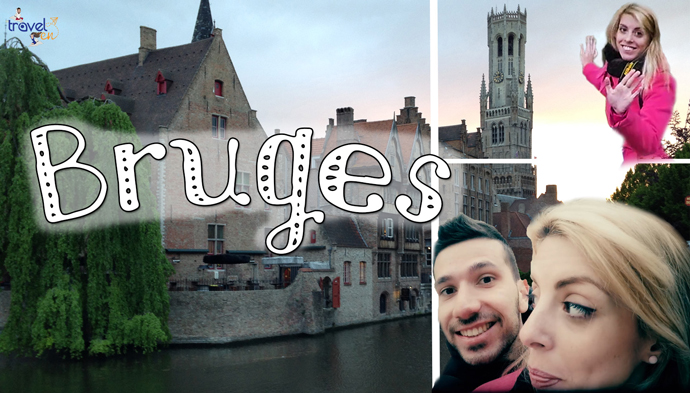 The trip of tastes is completed with the worldwide famous Belgian beers. We knew that the country has a long history in brewing, but we could not imagine the variety of tastes and smells that it has to offer. We tried to taste as many as we could and in three days we each managed to drink 5 liters (15 bottles). If you consider that the average Belgian drinks 255 bottles per year, imagine what would happen if we stayed a bit longer! We mostly liked the abbey beers, while we were impressed by the increased percentages of alcohol that went as high as 26%! So you can safely assume that we didn’t need a lot…with one beer we were in good cheer. In the city we also saw three breweries that are still in business and many pubs for beer-tasting. N: Beer…what? E: Shhh! This is the only way we can justify ourselves for the liters we imbibed without guilt! N: Justify or console? E: Hmm, both..

Unfortunately, neither the chocolate delicacies nor the juicy chops, not even the exquisite beer managed to console us during our last night in Bruges. Only the promise that we are going to visit it again helped us get on our way back. Even though three days are enough to go around it, you will surely feel that time is not enough to enjoy it. Bruges may be small, but it cannot go unnoticed. It is the ideal destination for those who want to rest, relax and meet new roads of tastes and times past.