Even though the new year was only a few hours old, we were already with our suitcases in hand, on the road to the central railway station. We were leaving the princely city of Vienna, where we had spent five wonderful days and welcomed the new year, in order to visit the city of Kings, Bratislava. Tickets were booked, the train was ready to depart, Nikos was trying to make himself comfortable and get some sleep and I could not wait for the train to start rolling so I could get lost in the journey. After all, train trips are my favorite, but this is a story for another time. Soon after we passed the border, I saw something that made me jump with joy, as well as wake up half of the wagon’s passengers, making them look at me all weirdly…oops! It was starting to snow and I was happy as a child. Vienna might not have done us the favor of offering white holidays, but Bratislava was keeping it as a surprise.

“The snow had turned into a blizzard”

Unfortunately, my joy would not last for long, as while we were exiting the station, a sort of adventure was waiting for us. The fact that we were not prepared in regard to our means of transport, the taxi drivers that were asking for a small fortune, the girl with her tiny amount of knowledge of the English language, all contributed to the story of us riding a bus with a completely different direction, waving our handkerchiefs. When we figured it out (already too late), we were stranded in the middle of nowhere, the snow had turned into a blizzard and I was starting to get hungry (imagine how dire things we getting)! The aimless wandering lasted for about an hour, until we got in the right bus and finally reached our hotel, which was only 10 minutes away from the train station!!! 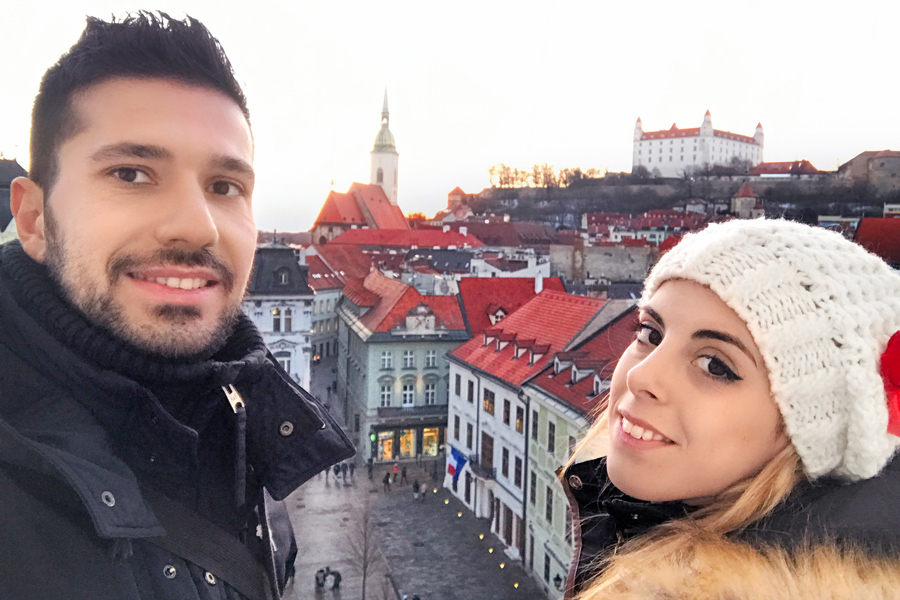 The Slovak capital is a small city that one can easily see on foot, as all points of interest are close to one another. Of course, electric and diesel buses make browsing much easier, while the tram lines guarantee a more picturesque trip. After we rested for a while in the hotel, we took off for the standard reconnaissance walk in Bratislava. In the tram, free of burdens and concerns, we thought that it was time for the city to give us what it owed us. A few beautiful pictures and some tasty experience.

“We stole some of the period’s prestige”

Our first contact with the historical center was slightly baffling, as we felt like we were in Prague and Vienna at the same time! On one side we were seeing baroque buildings and palaces with aristocratic grandeur and on the other side there were gothic towers and castles. But while exploring a little more, during the next few days, we realized that it has its own identity, with the cobbled medieval alleys and the colorful pastel houses, shining in their own colors. We walked along the kings’ route, following the small golden crowns and stole some of the period’s prestige. We stood under the magnificent Michael’s Gate and the “suspended” Laurinc gate. We photographed the narrowest house in Europe, point zero and the bronze statues hiding in alleys and squares. We explored the crypt of St. Martin, enjoyed the service in the Blue Church and admired artworks in the museums and the wonderful Nedbalka Gallery. 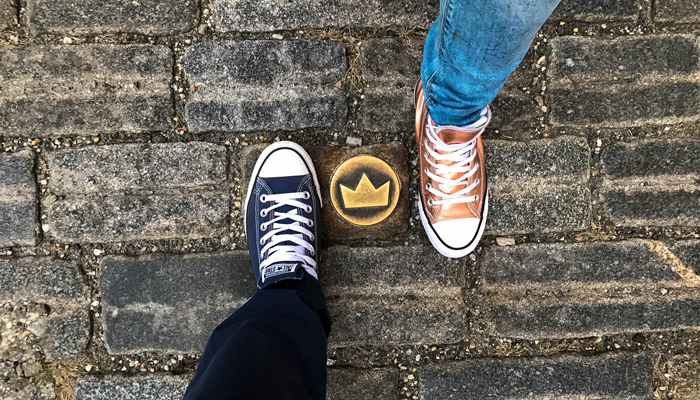 If you think that Bratislava can only show you one time period, you are completely wrong! You will change your mind once you visit it. Going up to the castle, you will be directly taken to the Middle Ages and the Renaissance, while if you visit the Slavin Memorial, with the excellent view of the city, you will get lost in its soviet past. While walking in its squares and streets you will feel today’s pulse, and if you cross the Danube’s New Bridge you will get teleported to the future, in a UFO!! Whatever you decide to do, you should keep in mind that Bratislava is not a city for one day. It requires a lot of walking in order to discover it.

“And as far as desserts go Oh Mondieu”

Even if you only have little time at your disposal, you should not miss the chance to try the local cuisine, one of the best that we have ever tasted. The Haluski, the Kapustnica soup, the Zemiakové placky potato pancakes, the local Bryndza cheese, the hot-dogs and meats cooked in dozens of different versions were a few of the delicious viands that joined our company, before, obviously, landing in our stomachs! All of these were accompanied by local beers, many of which were made by local producers. And as far as desserts go –Oh Mondieu– in Bratislava we found the best confectioneries and chocolate shops ever. Every day would end with some white or bitter chocolate combined with forest fruits and home-made lemonade! N: You forgot the caramel cheesecake! E: Shh, hush now, this is only for me…ehm, I mean us! It’s a good thing we left, because we were getting close to looking more like snowmen rather than travelers. N: Maybe it is a good reason to return to this city soon. What do you say? E: Do we have anything planned for next week? N: I wouldn’t expect anything less from you…! 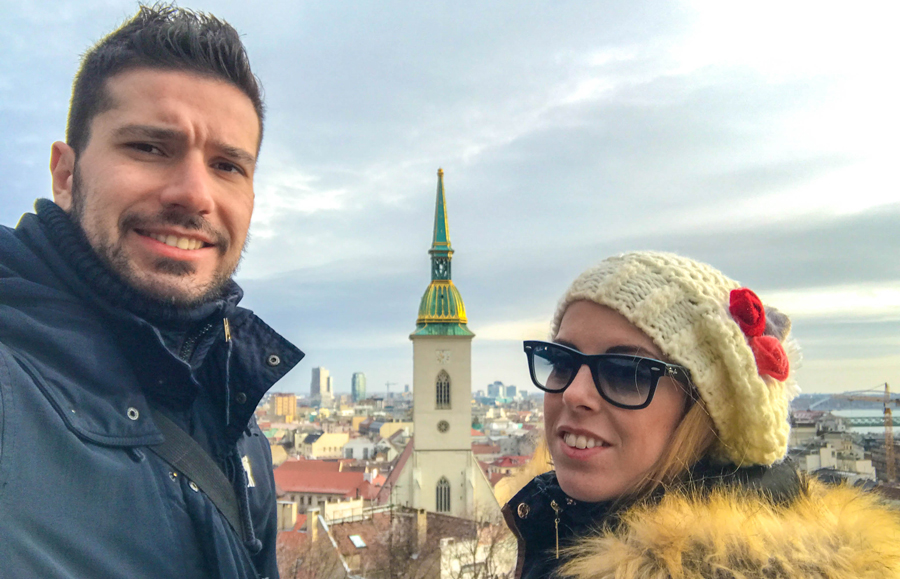 “The most popular sport”

Apart from the rest, the city is also famous for its entertainment options and vivid night life, with the hundreds of students (it is a university town, after all) being the ones giving the signal for the party to begin. The city is full of cafés, bistros, bars and clubs for every age group and taste. Fans of shopping can enjoy a spree in the city’s two malls, a bit outside of the center. Sports enthusiasts can watch a match of the country’s most popular sport, hockey. Finally, music fans have the chance to listen to the acclaimed Slovak orchestra, at the National Theater. In short, the city offers dozens of options to start and end your day. 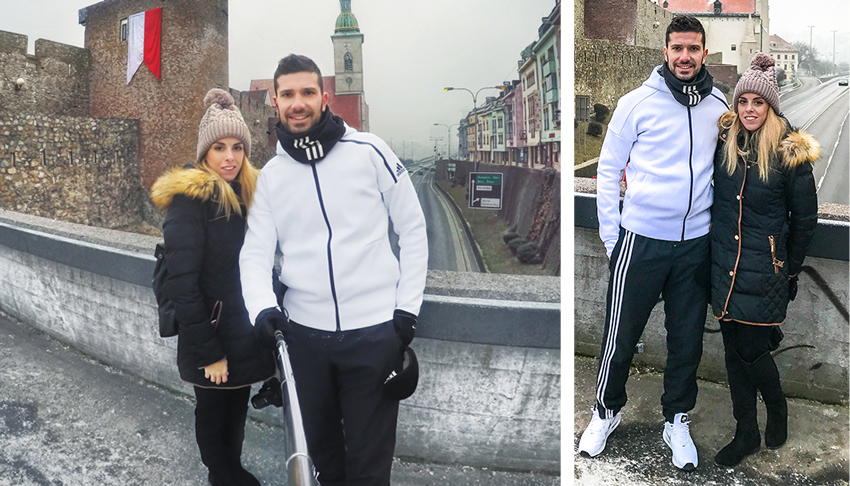 Life in “little Vienna”, as it is called, is quite affordable and flows in relatively slow rhythms. The people you will meet are rather friendly and calm, thus completing the picture of the small town. Finally, if you like excursions, then we have another great reason for you to visit Bratislava, as its location holds a great advantage. It is the only European capital that is connected to three others!! This way, you can easily and quickly travel to Vienna, Prague or Budapest.

“Our tabs are not yet closed”

Bratislava is another testament to the famous saying that expensive perfumes come in small bottles. Its small size in combination with its unique charm, invite everyone to meet it. For us, it will forever be the city of relaxation, special beauty and delicious flavors. And our tabs are not yet closed, as it has to compensate for the first difficult hours of the first day. We’ll be back. 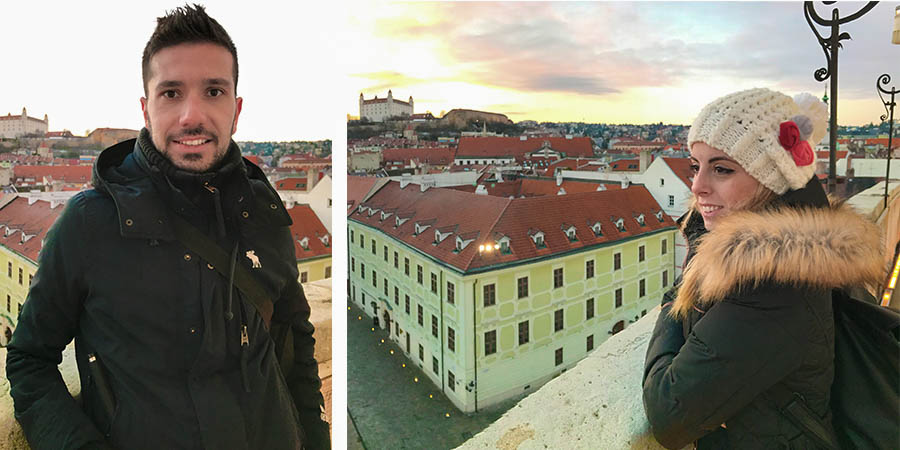