Surrounded by small and big canals, it started out as a small fishing village and ended up being one of Europe’s largest ports and one of the most enticing destinations in the world! A small city that has no reason to be jealous of other cosmopolitan capitals; a city that impresses every visitor with its history, art, architecture, multi-cultural character, picturesque beauty and liberation from all sorts of stereotypes, taboos and prejudices; a city that may be buzzing through day and night, but is, at the same time, one of the most quaint and quiet places worldwide. It might as well be named Neverland, but, fortunately for us, it is very real and its name is…Amsterdam!

Our initial reason for visiting the Dutch capital was business, but getting drawn into its rhythm, right from the start, was plainly inevitable. Our trip took place at the end of spring, but the cold, the humidity and the raindrops were loyal companions throughout our stay. With only 140 days of sunshine per year, the best time to visit it would be during mid-summer. But, if you have discovered the rain’s secret, like we did (the rain game), then spring, in my opinion, brings out Amsterdam’s prettiest side. Despite the fact that I had to wear every piece of clothing that I could find in my suitcase, the vigor of the green, blooming landscape, combined with the thousands of tulips that decorated the city, is something that I will never forget. 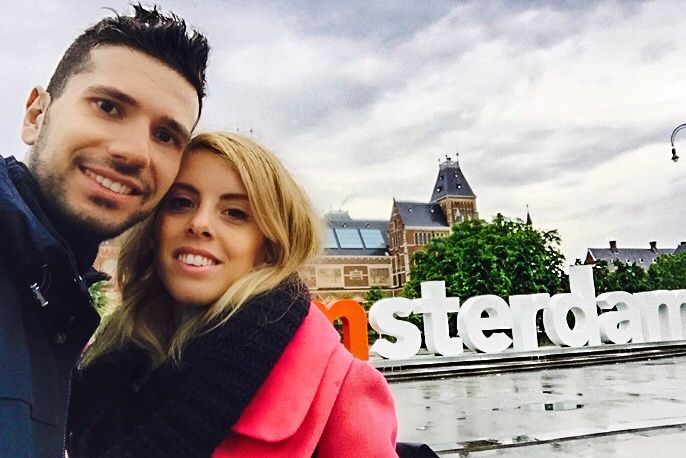 Although we stayed a bit far from Amsterdam’s center, in Zaandam, our transportation was really easy, as the city is known for its excellent transport network. We took the train to and from the hotel, while we used trams and, of course, bikes to move inside the city. The deal with bicycles in this city is seriously absurd…No, really, you cannot imagine it, if you don’t witness it with your own eyes! They were everywhere! Bikes locked on the canals’ railings, lying on the ground, side by side, one on top of the other, inside the canals(!), and thousands of cyclists crossing the streets, any time of day. No matter where we went, we could hear pedals rolling and bells ringing! I was more scared of getting hit by a bike, rather than a car! Nonetheless, it was the most fun way to explore the city, even in the rain.

Amsterdam is the no.1 city worldwide in museum density. There was always something to see, no matter where we were. From museums about cats and diamonds, to those displaying artworks of international fame. From the Rijksmuseum and the Van Gogh, to the Anne Frank House and the NEMO Science Center, options are many, for young and older fans of art, history and entertainment! With a well-planned schedule and the Iamsterdam card, we managed to visit lots of attractions and get a good taste of the city’s culture!

But, even without all the museums, the city is a sight on its own! A walk along the 165 canals with their numerous bridges was enough to persuade us. We crossed them by bike, walked along them and sailed in them on a small cruise ship. Each side offered us a different picture. Their quaint character is completed with the thousands of floating homeboats and the architecturally unique buildings that surround them. Buildings oblong, cramped side by side, with lots of colors, large windows and façades that lean forward and make you think that they are ready to jump into the water! Each canal, in every neighborhood, has its own charm, creating various frames for artistic photographs, in the light of day, as well as when night falls… 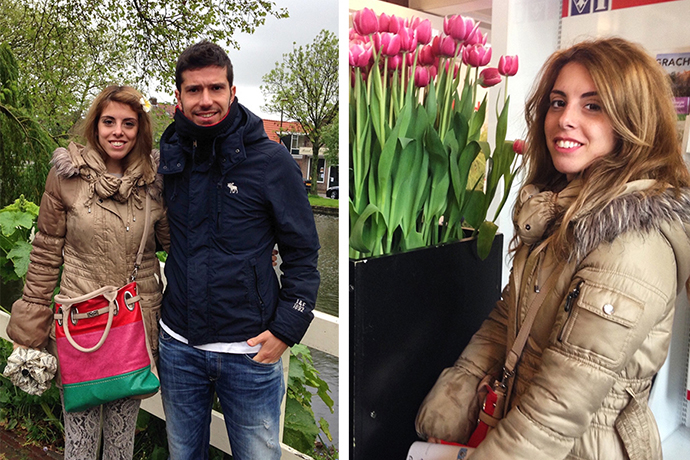 It may seem odd, but, in Amsterdam, life begins every…night! It is one of the few cities in Europe where the party keeps going until the early morning hours, while a great part of its tourism is because of just that. Residents, students, travelers, friends and couples come together, each one following their own way of expressing their freedom and uniqueness. From the Red Light District to the famous coffee shops and from well-known clubs to neighborhood pubs, in this city everyone can find whatever suits them, in order to pass an unforgettable night! So, don’t be alarmed if, while walking all carefree, someone hugs you out of the blue and invites you to dance, in a cloud of “scented” haze! You will probably start laughing till tears come out!

In general, the atmosphere in the city is very pleasant and this is because of its people aaand…some other factors! Polite, hospitable, helpful, tolerant, are only some of their characteristic traits. We were impressed by their simplicity, both in their behavior and their style. Even when it was raining, they were just wearing a coat, without worrying about getting wet or if their hair gets messed up. (For me, at least, it was a great relief to be able to wander around, without an umbrella, and not caring when my curls got frizzy. This is really the land of absolute freedom!) The most impressive fact, though, was that everyone, even elders, speaks English fluently. And everyone was willing to give us any kind of information, from what the weather would be like the next day, to where we could have a meal.

However, the food factor was something that we weren’t particularly concerned about. The city’s multiculturalism played an important role in this, as it helped us choose among numerous cuisines. The Eastern ones, with their doner and spicy foods, are those that mostly appealed to our tastes. Although we tried the local cuisine, it didn’t really impress us, as we found it a bit heavy, with indifferent tastes. But we definitely honored their street food/snacks! No kind of French fries, cheese, delicious Poffertjies or fried fish were left untried! After all, we are known for our love of healthy food…

So, Amsterdam is a city that anyone can visit on different motives. But, everyone leaves full of images and experiences, from a place that stubbornly denies to grow up and fit into the social norms. Our four-day stay was enough to help us form our own opinion. But we are certainly going to visit it again, so we can meet the other parts of its multilateral character and complete our very own puzzle of memories…