One evening in the house living room, watching basketball and eating chips..

E: Do you know what I wanted to be when I was little? N: Detective Poirot! E: No, this was later! I wanted to be a ballerina or a basketball player! N: Hahahahahahahahaha E: Why are you laughing? N: Okay, I can accept the ballerina part…but basketball…hahahaha! E: For your information, in school I was scoring three-pointers all the time and was above everyone, like Antetokounmpo. N: Like Anteto-smurfo you mean, hahaha! E: If only I was a few centimeters taller, I would be playing for the NBA now. N: When you say a few? E: Like 15! N: Yeah, okay…And why didn’t you become a ballerina? E: Food won me over! (I said while grabbing five chips) N: Why do I bother asking?! But to cheer you up, you just gave me an idea for a Christmas destination. E: Didn’t we say we were going to Krakow? N: Yes, but since you have these unfulfilled dreams, this trip will make it up for you. E: Christmas, Ballet and Basketball…where will we find all of these combined? N: In Moscow, my love, in Moscow! 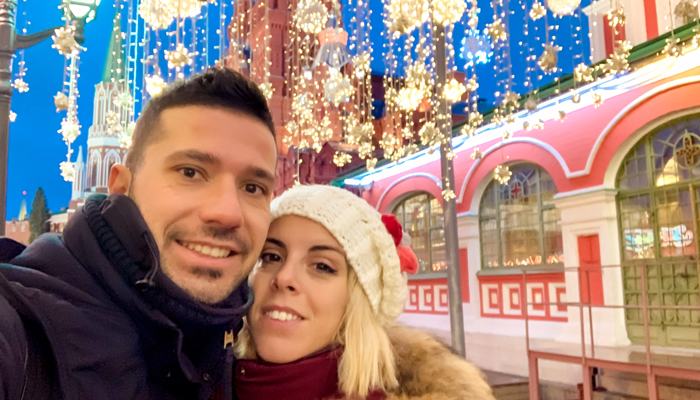 To be honest, I always wanted to spend Christmas in Moscow. Firstly, because all odds are in my favor for it to snow, and secondly, because the city is famous for its festive decorations. Of course, I didn’t take into account the cold, as in the winter temperatures easily reach -10°C (with the record being -42.2°C)! The cold-sensitive members of the travel-gang, as you can imagine, would be better off picking the summer season to visit it. I, however, for the sake of Christmas, was ready to become a Russian snowwoman! As luck would have it, the past year was one of the warmest Moscow has seen in 133 years! So, we roamed the city, we saw some snowflakes (at least for a little while) and we avoided the frostbite. We had a star! And what a star…of Christmas!

Having traveled to plenty of cities during Christmas holidays (see London, Prague, Berlin, Vienna, Bratislava and Budapest), we can say with confidence that Moscow is the most decorated city in Europe (and beyond). No, we are not exaggerating. These guys have taken Christmas decorations to a whole new level. Big, bright arches, Christmas trees, illuminated balls, galleries of string lights, carousels, ice-skating rinks, Christmas markets and villages, pop up on every step and create a warm and magical atmosphere. The walks under the “rain of lights” on Nikolskaya, the buildings and store fronts with thousands of pinned lights and the dances with the Christmas melodies, fulfilled all of our childhood dreams and made us love this spectacular season even more. 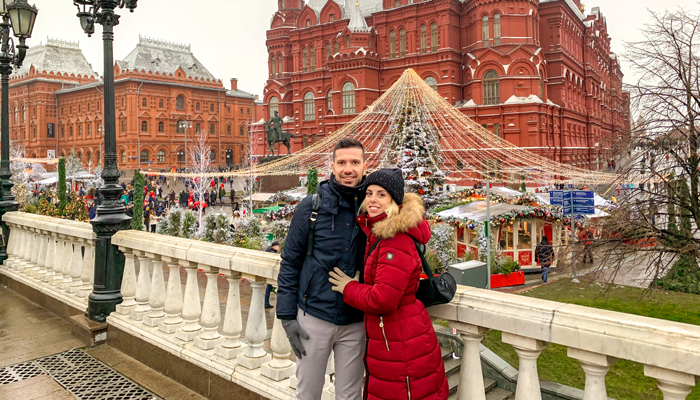 The Russian capital, even though it is only one millennium old, has a long history and offers tens of reasons to visit it also in other seasons of the year. The small castle, as it started out, developed into a global commercial, financial, political and scientific center, while in the last few years it is constantly gaining ground in the tourism industry as well. Visitors are flocking from all corners of the earth to meet the colorful city, the capital of the Tsars, the city of the Romanov family, Dostoyevsky, the Bolshoi, the cosmonauts and the millionaires! Of course, the heart of Moscow beats in the center and, more specifically, in the world’s reddest square! Even though it is surrounded by plenty of significant buildings, like the Kremlin, the State History Museum and the GUM luxury mall, what steals the show is the colorful Cathedral of Saint Basil. The most beautiful (to us) cathedral in the world, “stole” many moments of our trip and filled quite a lot of space in the camera’s memory card. 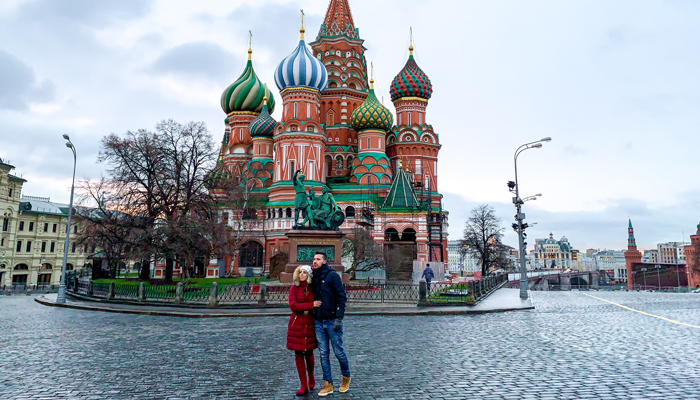 The seven-day trip was full of history, walks, shopping and endless play. We visited museums and churches, we cruised the Moskva river, walked in endless parks, shopped for babushkas at local markets, almost got lost in Europe’s largest mall (Avia park) and, of course, watched a basketball match of CSKA! And for the dream to be complete, we visited the legendary Bolshoi Theatre. Only problem was that it was closed due to construction work on Tuesday! We went back on Wednesday, same thing! Thursday was my last chance, as we were leaving on Friday. They told me “we are sorry, but today we only accept visitors with online booking” (read the Tips so that you at least are informed). But I didn’t give up…The snow started to fall, the Bolshoi Theatre and tens of Christmas ornaments behind me and I, mounted on a ledge, was dancing the Swan Lake alone. N: More like the Snowman Lake! Let’s go, we are freezing out here! E: A huge talent was just wasted… N: Quel Dommage!

We continued with a walk in the new city with the skyscrapers, we saw orcas in one of the largest aquariums in Europe and flew all the way to the moon! Virtually, of course, at the Cosmonautics Museum, but even so, one more of my dreams was fulfilled. N: Don’t tell me now that you also wanted to be an astronaut!! E: Well no, I just wanted to see a spaceship up close. N: You scared me there for a moment. E: I, on the other hand, got scared at the cold war tour. Did they have to take me 65 meters below the earth’s surface? N: At the metro you went down 83 meters! E: 83?!! (My heart stopped.) 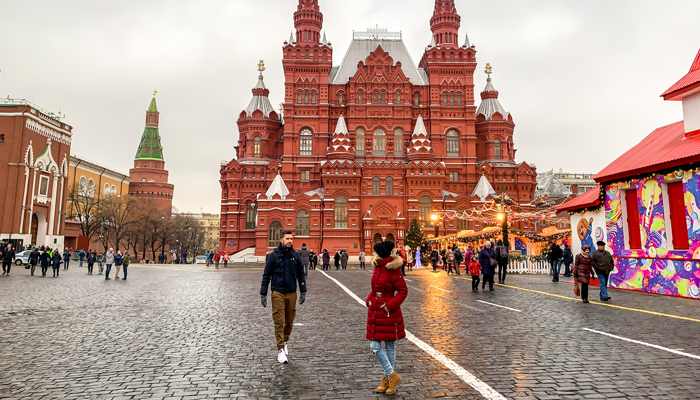 Even now that I know how deep it is, I would go again without second thought, as the Moscow metro, also known as “the people’s palace”, is on its own a reason to visit the city. Murals, mosaics, arches and huge chandeliers adorn every one of the 200+ stations, where we went inside and out with only one ticket. For our transportation we also used buses, tram, trolleys, the overground metro, as well as our feet! The cold and the long distances did not hold us back, as, during this trip as well, the heat lotions and all-time favorite onion outfits kept us warm all day. Of course, the soups, vodkas and a couple (or maybe ten) glasses of wine we drank at shops might have helped also, but I am not sure.

We cannot say that we were especially excited about food in Moscow, but it also did not leave us indifferent. The Russian cuisine, although a bit heavy, is ideal for anyone who loves vegetables, soups and bread. From the traditional dishes we tried Stroganoff beef, freshly kneaded Khinkali (like pizza boats), the Russian ravioli Pelmeni, Borscht soup and the widely known Russian salad. Sweet delights were not absent from our trip, as almost every meal was followed by Syrniki (local pancakes), seven-tier(!) cakes, millefeuilles, Chak-chak (something like a round brittle), chocolate salamis and the traditional Morozhenoe ice-cream. Which, by the way, the locals were happily eating in…cups. I still cannot decide which was weirder. Ice-cream in -10°C or the smiling Russians? 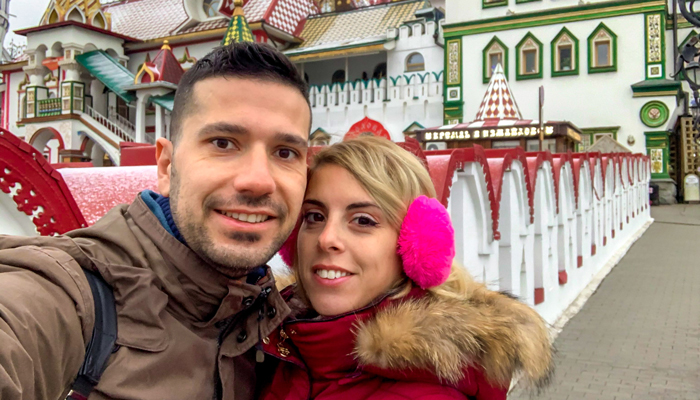 The Muscovites, as well as most Russians, are not famed for their hospitality and politeness. From the moment we tried to issue the Russian visa ourselves, we did not form the best impression. Luckily, once there we met people that changed our minds and helped us understand their mindset and culture. Even though they were not especially warm, they helped us with whatever we needed, even if they did not speak a word of English. Now that we mention it, apart from a few exceptions, they also spoke to us in their language. So, if you decide to visit it you have two options. Either learn Russian or practice sign language. N: As a matter of fact, I learned plenty of words! Dobre utra (good morning), Niet (no), Da (yes), Priviet (hello), Davai (let’s go), Dasvidaniya (goodbye), Spasiba (Thank you). E: I, on the other hand, learned Stroganoff, Vodka, Borscht and Piroshki. N: What else would you learn?! E: Ya niet panimayu (I don’t understand)!

We spent seven days in Moscow, and we needed another seven to get enough of it. The Christmas atmosphere in combination with the colorful city and, of course, soft winter weather, offered us the best trip with which to close the year. Moscow was among the destinations that surprised us pleasantly and fulfilled many of our dreams. And you know what? If at some point I did not aspire to become a ballerina or basketball player, we might never have visited it! 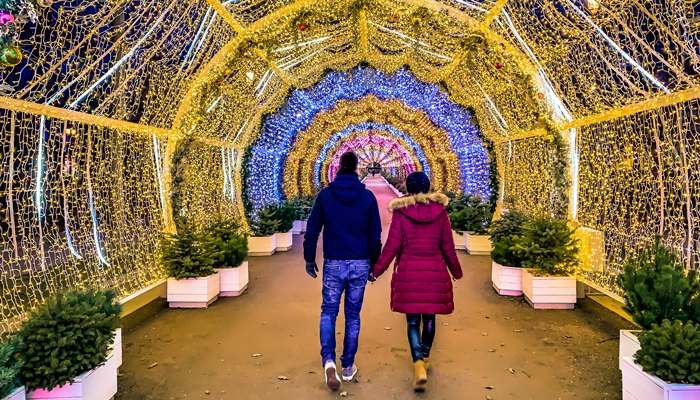