It is truly astonishing to find out that in the city there are more bikes than there are people! This city’s love for bikes is truly remarkable! A large percentage of the residents have taken motorized means out of their lives and use exclusively bikes for their transport. Bikes in the streets, on the railings, hanging from the balconies, inside the canals…bikes everywhere! In association with MyHotelBike, we present you a very interesting article for the biking life in Amsterdam.

MyHotelBike has a loooot to tell you.. 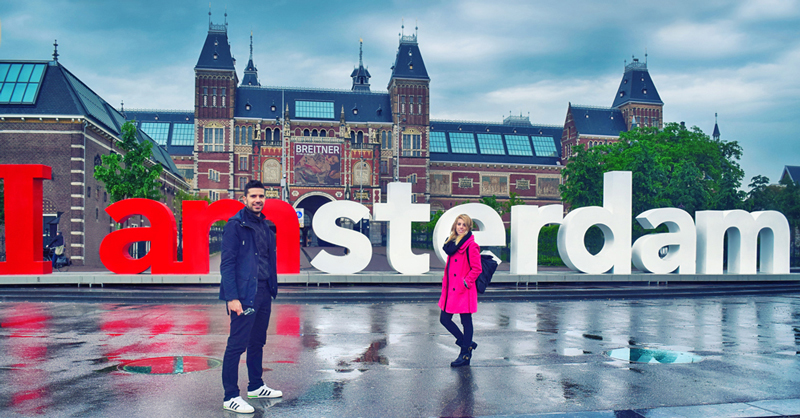 Be Dutch for a day – everything and always on a bicycle. Jump on a bike and start exploring the city like the locals do since they were kids.

Amsterdam has lovely canals with little bridges, parks and famous squares all around town. The Dutch cycling culture goes way back, it is a way of living. At this moment there are even more bikes than people, crazy right! 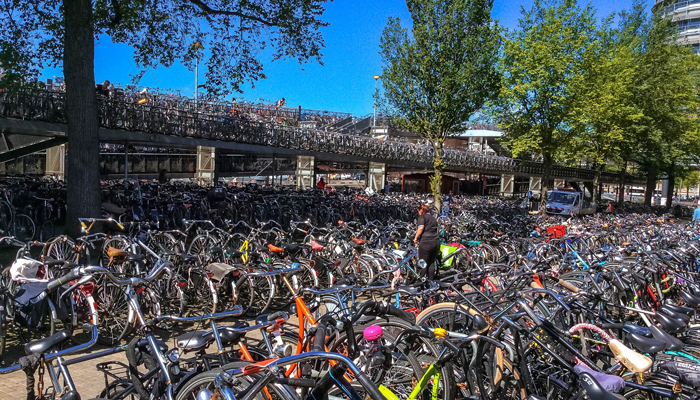 On the streets of Amsterdam you see countless of cyclists heading to or from work, transporting their kids to school with cargo bikes, or carrying anything else: from groceries and house pets to couches and fridges. The popularity of cycling in Amsterdam is undoubtedly aided by the fact that Amsterdam is a ‘flat’ city. It is compact, densely populated and the climate is mostly moderate. The average speed by bike is 16 kilometers per hour. In a crowded city like Amsterdam people cycle slower than elsewhere, especially in the city centre. However, when people are in a rush it goes faster and locals tend to bend the official bike rules (don’t follow their example!). Wherever you are from, cycling in Amsterdam is something else. In a good way but always be on your guard. Renting a bike in Amsterdam is an exciting experience. 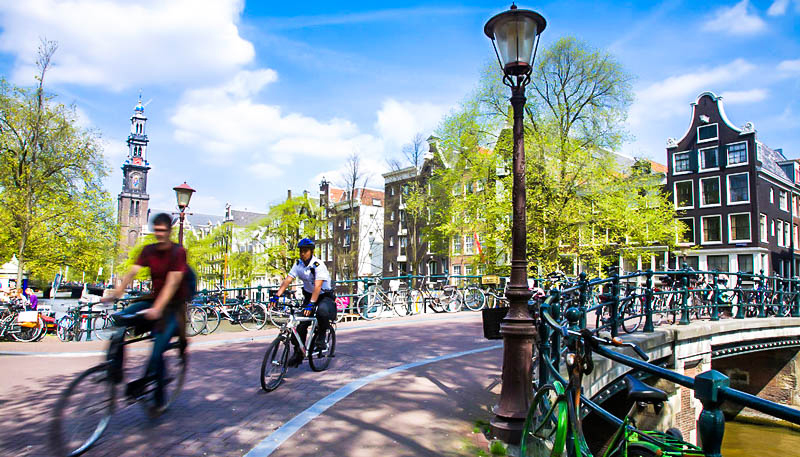 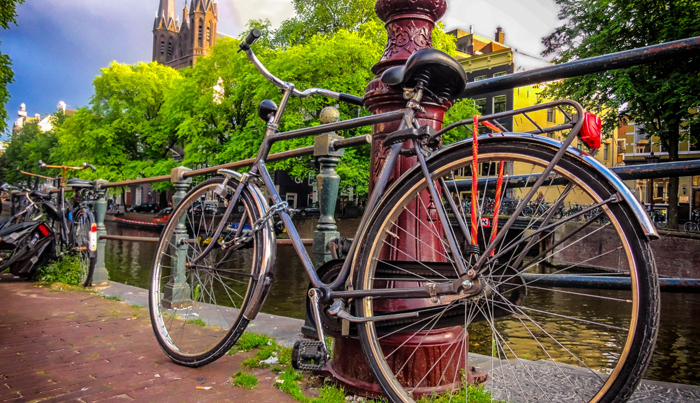 The ultimate guide to Amsterdam

In Amsterdam 32% of all traffic movement is done by bike, compared to 22% by car and 16% by public transport. In the city centre this percentage is even higher, 48% by bike!

Naked people cycling through town, like it’s just another day? Only in Amsterdam! Every year dozens of people participate in The World Naked Bike Ride, in the capital of bikes. The participants cycle naked through the city to protest against the car culture and draw attention to the vulnerability of cyclists. If you are lucky enough to be here at the 1st of July, feel free to join! 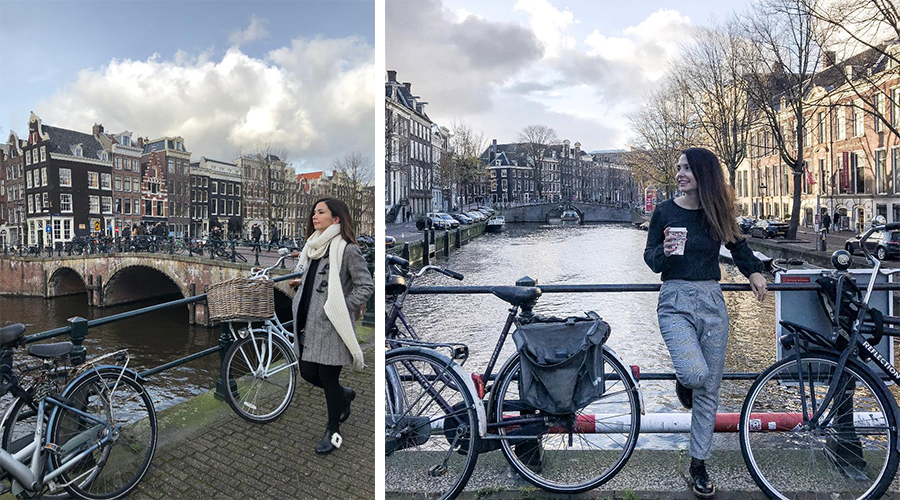 Trips made by bike

Amsterdam is the most bicycle friendly city in the world, with 63% of the locals using their bike on a daily basis. With more than 780,000 people, over 60% of trips are made by bike in the inner city and 40% in the greater city area! 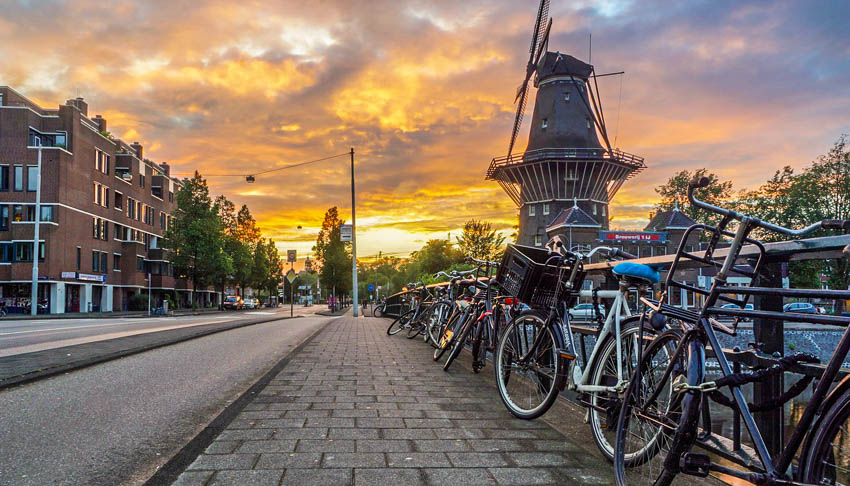 Amsterdam through the eyes of the locals

To motivate cycling, the governance has placed 500 km of cycling paths and 254,000 of bike parking racks. These kinds of statistics make Amsterdam the cycling capital of the world. 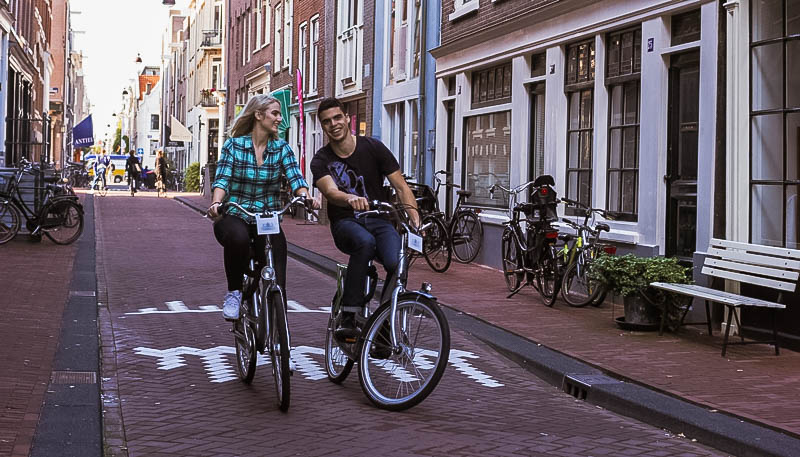 Bike Rental Amsterdam is the most popular activity of the Netherlands, making cycling in Amsterdam an absolute must-do. We want to secure your safety as much as possible, so we have pointed out some tips for safe cycling in our beautiful city.

✅ ROAD RULES: Follow the rules of the road: do not cycle on footpaths, shopping streets or motorways.

⚠️  LOCK YOUR BIKE: Lock your bike wherever you stop, bike thieves in Amsterdam are always on the hunt.

⚠️ OTHER TRAFFIC: Be aware for other kind of traffic, like cars, motorcycles, scooters, trams, passengers or police vehicles.

⚠️ TRAM RAILS: Watch out for the tram rails!

✅  STAY RIGHT: Stay on the right side of the road.

⛔ NO PHONE: Never use your phone while cycling.

✅  GIVE A SIGN: Use your free hand to sign in which direction you are going to move.

⚠️  PARKING: Remember where you park your bike – searching hours to find your bike is never a pleasant experience!

⛔ CYCLE SOBER: Do not cycle drunk or stoned, for your own safety.

The ultimate guide to Bologna 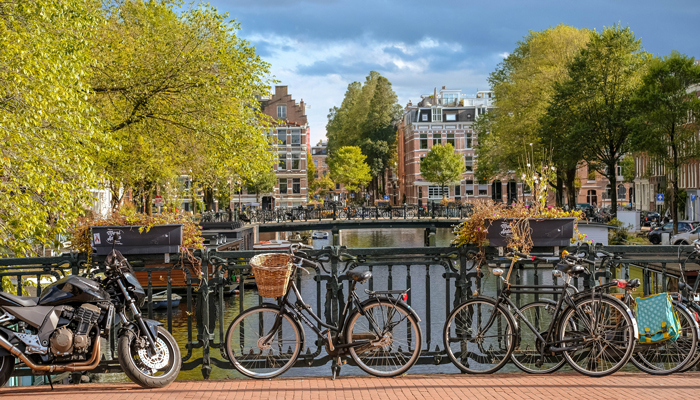 Rent a bike in Amsterdam – explore the most friendly rental stores

Get the best city bikes for the most competitive prices: MyHotelBike is motivating hotel guests – and anyone else who feels like cycling – to jump on a bike in Amsterdam. Bike tickets at our selected Amsterdam bike rental stores vary from 10 eu to 15 eu a day, depending on the location and amount of rental days. Their prices are always including insurance. 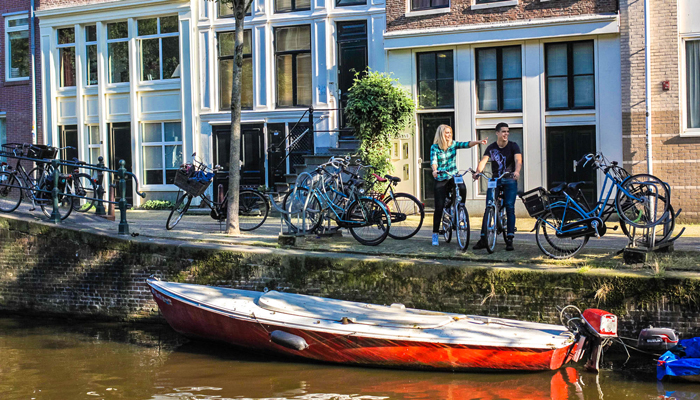 The rental bikes at our selected stores are built by the popular Dutch bike brand “Union”. They all have metal hand brakes, 7 Shimano nexus gears and adjustable seats. Easily switch gears and cycle along the canals, bridges and historical buildings of this cozy city.

Every visitor gets a free city map to explore the city your way.