E: Look what I found!! N: Ah, once again some forgotten clothes from high school that still fit you? E: Well, you are close when it comes to the era, but on the subject, you are eons away! N: Ok, I’m out of guesses. E: Look at this picture…Look how young…Check these images. Do you remember how great a time we had? N: Bring it closer… E: Don’t tell me that you have forgotten our first trip… N: Let me get a good close look! E: Oh God, I cannot believe this! He forgot our first trip to Santorini! N: Oh, yeah!! Not the best of looks for us this one…Don’t tell me you want to insta-story it, the LOLs will be heard all over the platform! E: No I will not (I will post it on our account)…if you promise that we will go again! N: I like your suggestion, it’s intriguing….something like a 10 Years Challenge? E: Exactly!

I found all the photographs, old guides, even the cave hotel where we had stayed in 2009. What a blast! E: We found a hotel to stay, I called out to Nikos…we had paid 70€ back then, how much do you think it costs now? 100-120€? We are also going in May (off season period)! In short, the room we had stayed back then had now been revalued at 300€ per night!! I didn’t dare to check how much it costs in August. 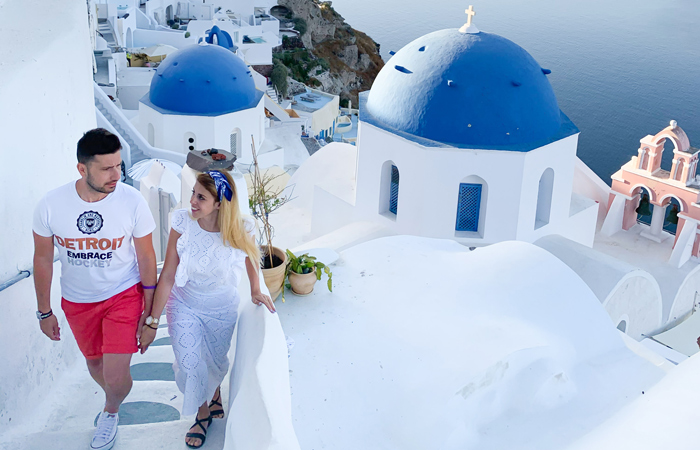 It was a warm and quiet morning, in Autumn of 2009, when we headed out for Santorini from the port of Thessaloniki (back then there was a direct route)! For 22 hours we battled the waves, and not even in a cabin! After 10 years, the time for the 10 Years Challenge Santorini had arrived! This time, things were very simple, as we arrived on the island in less than an hour by airplane!

The month we chose to visit it was, of course, May (off season). Santorini is beautiful only if you go off season, since during high season the situation is stifling and prices are sky high…Not that they are low in general, but in the summer months things get out of hand. Santorini, like Mykonos and Crete, is after all an individual “country” inside our country. Here, crisis is an unknown word, as all stores operate in full capacity, while hotels have 100% occupancy!

We quickly started to remember streets, shops, attractions, squares and whatever had stayed with us (as a memory) since our first trip. But we were ready to build new images, create new experiences and try new flavors. N: Speak about the attractions and forget food for once! E: No worries…Everything will take its place, one by one! But as Nikos says, I should take things from the beginning. 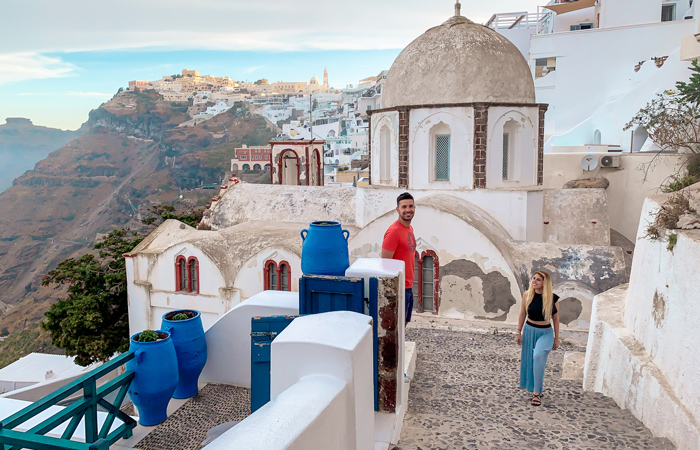 Our first impression from the Cycladic island is that it grew…it really grew! 2009 Santorini does not resemble in any way 2019 Santorini! Ok, you’ll say, everything in the world changes. Yes, but in Santorini they changed with a rapid pace!

But what stayed the same is the unique aura it exudes when you walk on the edge of the Caldera. Nowhere else in the world is there a similar landscape, with the white cave houses and the blue domes of the churches, hanging literally from the edge of the cliff. From Fira to cosmopolitan Oia and from Ancient Thera to the deserted Therasia, the kilometers we traveled on the island were many, once more. But, we also had the best means of transport…Nooot an ATV like many others make the mistake of renting (read our Tips to find out why), but our fantastic scooter! 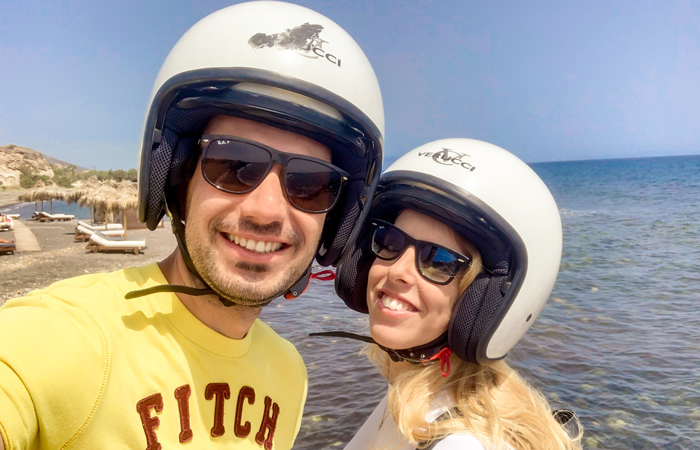 Of course, we could not avoid the legwork… You see, we wanted to take the 11km-long hiking trail of Fira-Imerovigli-Oia, climb up and down the 270 steps from Korfos to Manolas and walk the entire Therasia, climb down another 588 steps from Fira to the old port and, of course, explore all of the island’s settlements. Ooh, I forgot to include the ascent on the volcano in the scorching heat and the sulfur “fragrance”! Now I see why I came back ridiculously tan without having laid my body on the beaches! Guys, Santorini’s sun is seriously hot…! But we have to admit that the images from every inch of the volcanic island compensated us both for the weariness and our poor peeling noses.

And what can I say about Santorini’s sunset…No matter how much I describe it, it is a completely different thing to watch it in person. Think of a live canvas with the colors of the sky changing from light blue to pink-purple-orange and the sun fading out behind castles, chapels, windmills and in the end diving into the Aegean Sea. It does not get more romantic than this… (if we exclude the thousands of tourists that are hanging from every possible and impossible spot for an Instagram photo). 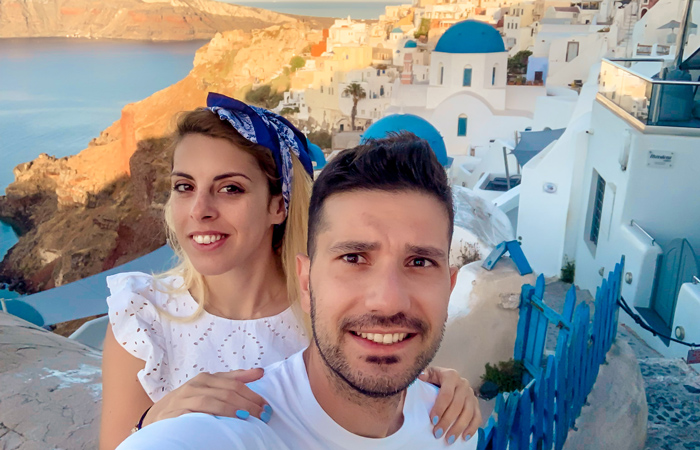 Apart from the magical sunset, the, according to many, lost Atlantis makes the list of millions of visitors per year for the activities but also for the luxury accommodation experience it offers. Starting in the morning, you can scuba-dive, kayak, jet-ski and take a ride on a catamaran or yacht, while in the evening you can relax in pools, drinking champagne or dine in one of its thousands of restaurants.

What have I not mentioned at all? Oh yeah, the beaches! We may be on an island, but beaches are not Santorini’s strongest weapon! Exceptions are the unusual black beaches of Perissa and Perivolos, the Red and White beaches close to Akrotiri and the Lunar Vlychada. Not so much for their waters, but for their morphology and colors. I, for once, did not swim in any of them, although I had packed five swimsuits! Regardless, I had a traumatic experience from the previous time Nikos dragged me to get in the “dark” (but extremely clean) waters and I didn’t know what was going to “eat” me from below…My memories were still fresh from those moments, as fresh was the taste of the original Santorinian fava! What a creamy, delicious spread that was; 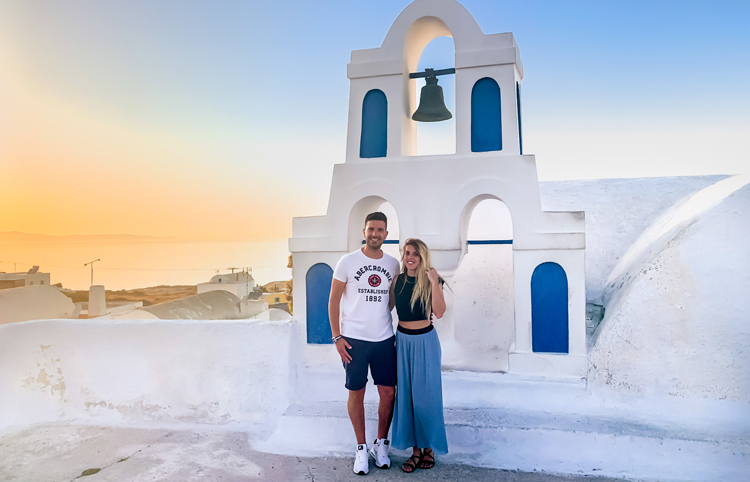 N: You sly fox! How did you do this? Talking about the sea working up the appetite and the moment came that you talk about food! Well, I give you that…You surprise me every time! E: Like I wouldn’t make a nice introduction..

So, subject Food Santorini. What comes to mind first when you hear volcanic soil? Certainly not that it can produce even PDO products!! The protagonist of the local cuisine is the Santorinian fava, while its sweet cherry tomatoes, fresh or sundried, almost always have a spot on the table. Fried white eggplants, fluffy zucchini fritters, the special katsouni (dry cucumber), yaprakia (stuffed vine leaves), pies, Santorinian sfouggato (omelet), kopania (dessert from barley rusks), melitinia (with mizithra, yoghurt and mastic), as well as the local chlorotyri (fresh cheese) would every day fill our plates at the taverns. And since we were on an island, the menu included fresh fish right out of the Aegean’s waters. As for our most tasty experience, it was none other than the excellent food tour, through which, thanks to Aristoteles and in the company of the most fun group, we discovered and tried the Santorinian cuisine.

Apart from the food, Santorini is also famed for its wines. Exquisite varieties, such as the Assyrtiko, Atheri, Aidani, Mantilaria and Mavrotragano produce flavorful wines for all tastes. We tried the smooth Nychteri and the special Vinsanto, while we had a wine-tasting tour at one of the island’s canavas. For malt enthusiasts, on the other hand, there are also the local, cooling Donkey and Volkan beers! Finally, the night life on the island surprised us and kept us up until the sunrise, while the movie we watched at the open-air cinema was among the most beautiful moments of the trip. 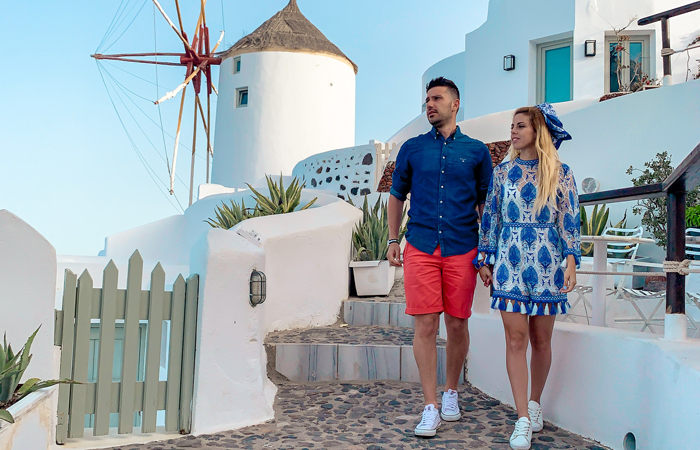 But our trip would not be the same without the contribution of the people we met. From the hotel and store employees to the “forgotten” locals of Therasia, everyone was polite and willing to help us and even welcome us in their homes. The only weird thing was that, at first, they all talked to us in English and once they realized we are Greeks they all said the same exact expression, roughly translating to “Nice to see you fellow patriots!”. Understandable; combining the 95% of foreign tourists with my exotic aura, they got misled!

I will not tell you that Santorini won over a place in my heart, as it was already there since 2009, when we felt its eroticism and the beauty of its individuality. An individuality that today has classified it as one of the 10 best destinations in the world! Santorini will continue to enchant anyone that visits it and to be the epicenter of tourism, drawing our attention (in a good way) for many more years. At least for as many years the fiery giant that is the Volcano of Santorini will keep sleeping! Until then, I hope that not another 10 years go by before we visit it again!